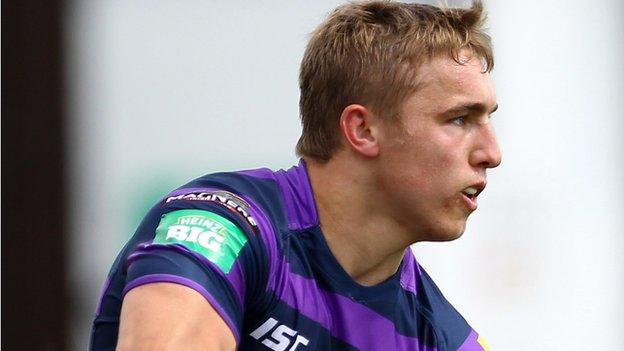 Sam Powell's late heroics helped Wigan avenge last season's narrow defeat at Widnes as the Super League leaders hung on for a one-point win of their own.

Patrick Ah Van completed his hat-trick two minutes from time, Jack Owens converting, but it was not enough.

Shaun Wane's men, who made the mistake of under-estimating Widnes by playing a weakened team in the corresponding fixture last March, were this time badly depleted because of injuries.

Tierney was one of several Academy products in a Wigan side shorn of nine first-teamers, with Ryan Hampshire another 18-year-old making his debut.

After getting off to a good start when Logan Tomkins, Sam's younger brother, went under the posts with his first Wigan try early on, Widnes replied though Ah Van, fit again after a knee injury.

But Tierney, watched by his famous dad, marked his debut with a try in the left corner, before Gelling's effort, bolstered by Josh Charnley's second successful conversion, earned a 16-4 lead.

Widnes hit back to level at half-time after tries by Adam Lawton and Frank Winternstein.

But Wigan were hot out of the blocks again at the start of the second half, winger Charnley crossing for the eighth successive match.

His 22nd try of the season took him back level on top of the Super League top try scorers' chart with watching Wigan and England team-mate Tomkins.

Rhys Hanbury then levelled the scores again with a superb individual effort after collecting a good offload from Dave Allen before picking out Ah Van with another fine, although suspiciously forward pass for the winger's second try.

Ah Van then thought he had his hat-trick, only for video referee Ben Thaler to rule that he had just grounded the ball in touch.

Wigan made the most of that reprieve with a break upfield that saw Gelling cross to level after a fine move that also persuaded referee James Child to go upstairs to check, for what seemed an age, for potential obstruction.

But, although Charnley then missed the conversion after this unnecessarily long delay, Wigan edged back ahead when 20-year-old Powell landed his stunning drop goal with eight minutes remaining.

Powell made an even more impressive intervention moments later with a darting run and brilliant pass inside as he fell for Taylor to claim the decisive try.

Ah Van's final try, converted by Owens, who matched Charnley's four kicks for Wigan, set up a tense final minute, but the visitors saw it though.

"Lewis Tierney is a good player. The only way I am going to find out is putting him in games like that. He will play again this year. He is a real talent."

"I have players who have had operations and others are struggling. They are genuine injuries. I shouldn't have to justify that.

"I want to see how the young kids go. We came and won the game. We should be speaking about one of the best youth structures in the competition."

"We didn't lose it from the drop goal. We lost it from their tryline with a couple of missed tackles. The first try was a soft try and we made errors.

"We were against a well-drilled highly-talented side. We worked hard enough to get something out of that game and the lads are really hurting.

"We are in the margins at the moment, just the wrong side of them.

"You saw a very tight squad and some lads in my team maturing and starting to get what it is about."