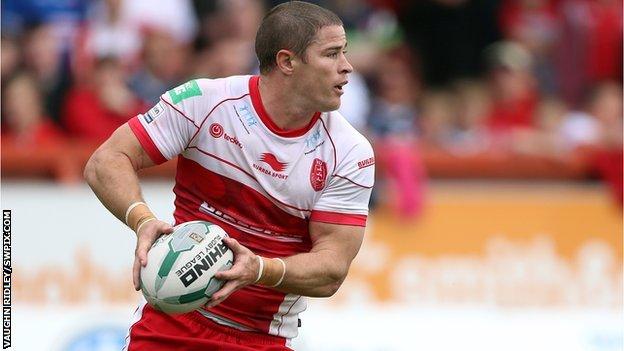 Rovers were 22-10 down just before the break, only for Graeme Horne to crash over and reduce the deficit.

They then scored 18 points in six minutes midway through the second half.

Burns and Brown each grabbed a second try before Con Mika crossed from close range to carve a 12-point lead, Michael Dobson's drop-goal sealing it.

The Giants were playing their second game in four days after Monday night's victory over St Helens and John Smith's Stadium and that began to show in the second-half as they struggled to deal with wave after wave of Rovers attacks.

The Robins last match was almost 36 hours earlier and they made their extra freshness pay to run in three second-half tries as Huddersfield tired in the closing stages.

"I'm pleased with the performance because the boys worked hard and followed the game plan.

"I'm not getting too carried away though as Huddersfield had a short turnaround and they had some tired boys tonight.

"It was a very good start from us but we let Huddersfield back in the game.

"But I won't be too hard on the guys as in the second half we played well and deserved to win."

"Obviously the loss is disappointing and especially the manner of it.

"Sometimes in life you get what you deserve and tonight we did but I just think we robbed ourselves of energy and keep giving teams the ball.

"I thought the ruck was very quick from our point of view which let them get on a roll.

"Fair play to Hull KR, they played better and won - the scoreline tells you that."