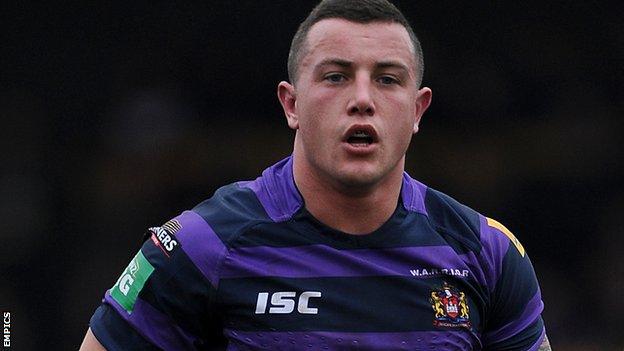 Wigan forward Chris Tuson will leave the Warriors at the end of the season to join Wakefield Trinity Wildcats.

The 23-year-old turned down a new three-year contract offered by Wigan to move to Yorkshire on a two-year deal.

"My main aim is to play every week and be a standout player.

"I've been playing a number of different roles and I really want to pin down that back-row position and make it my own," Tuson told the Wakefield website.

He's a player and a person I admire greatly and I rate him very highly, but I understand his reasons for going

He has been with Wigan since 2008, apart from a loan spell at Castleford in 2010, and has made 66 appearances for the club, scoring 12 tries - six of them this season.

Wildcats head coach Richard Agar said they were hoping he would bring a "hard edge" to the squad.

"He's a very aggressive and competitive player. He's come out of a very strong system and I think he'll add a lot of competitiveness into our camp," he added.

Warriors head coach Shaun Wane admitted he was "a bit gutted" by Tuson's imminent departure, telling BBC Radio Manchester: "He's a player and a person I admire greatly and I rate him very highly, but I understand his reasons for going.

"He wants regular first-team games and he sees he'll have a better chance of that at Wakefield than he will here. I wish him all the best and I hope things work out for him in the future."

Tuson has insisted he would remain fully committed to the Warriors for the rest of the season, adding: "I am a Wigan player and I want to see this season out with Wigan.

"I've come through this system with quite a few of the boys and I want to finish well, win some trophies and have a real strong end to 2013, then I can start thinking about 'Wakey'."