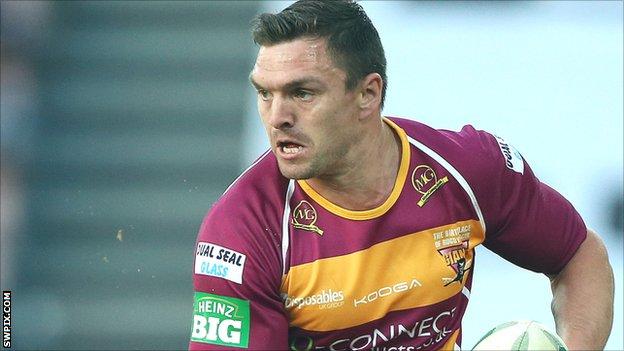 Danny Brough has ruled himself out of contention for Steve McNamara's England squad for October's Rugby League World Cup and is likely to play for Scotland.

The 30-year-old Huddersfield half-back captained the Scots at the 2008 event, but switched to England in 2009.

He added: "I'm going to play for Scotland if I get the opportunity. I've spoken to Steve [McCormack] and told him I'm available."

Born in Dewsbury, the former York, Hull, Castleford and Wakefield playmaker qualifies for Scotland by virtue of his grandparents.

Under Rugby League International Federation rules, he is available to either nation until he makes a senior representative appearance, regardless of squad call-ups, within a two-year period.

And as the Exiles fixture is not an official RLIF-sanctioned fixture, that appearance does not count on Brough's record, thus he is clear to switch.

Brough has been one of the most consistent half-backs in Super League, finishing fifth top points scorer last season, and is currently second only to Pat Richards in this season's rankings.

Melbourne's Gareth Widdop and Warrington pair Richie Myler and Stefan Ratchford are also in the frame, although which could put his participation in doubt.