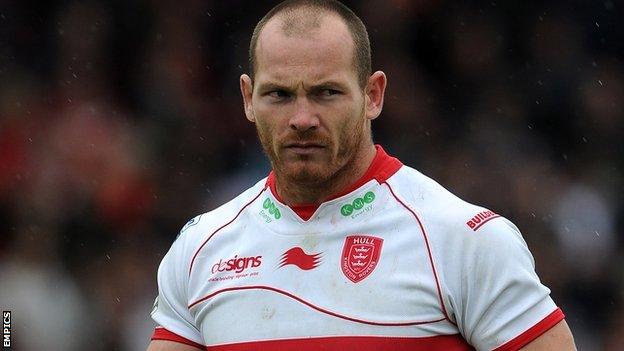 Jarrod Sammut's converted try and penalty gave the visitors an 8-4 lead at the interval, despite Lovegrove charging over the line for the hosts.

Keith Lulia extended the Bulls' lead, but Lovegrove and Withers scores put KR ahead for the first time.

Craig Hall and Withers went over late on to ensure the win, but Michael Platt did grab a last-minute consolation.

Last week's defeat suffered by Craig Sandercock's men at the hands of local rivals Hull FC, which came as a result of an incorrect call from video referee Steve Ganson, had dominated the headlines in the days following the Magic Weekend.

We were in some good positions and we threw it away

However, Rovers were able to put the disappointment of that controversial loss behind them and move back into Super League's top eight with victory over the Bulls.

Sammut combined with Lulia to put the visitors in front, but Lovegrove responded for the home side, barging past two Bradford players to touch down.

A Sammut penalty increased the lead and Bradford went further clear when Lulia rounded off a good move to score his side's second try.

Rovers skipper Michael Dobson sent Lovegrove over again and the hosts went ahead for the first time in the match when Travis Burns sent Withers clear.

Dobson was the creator again for Hall's try, before Withers made the most of a poor kick-off to put the result beyond doubt, despite Platt's late effort from Luke Gale's high kick.

"We're really happy with the two points. It was an ugly win, one we wouldn't have won six weeks ago. Travis Burns and Michael Dobson are combining better now and that helps.

"It was important for the fans to celebrate this win. We've played well the last few weeks and gained a lot of confidence.

"We were disappointed with last week's derby result. It's nice to get a win in front of the home fans. Now we are in the top eight, we have to stay there."

"This was a big game for us. We are going to have to do better in our games coming up. We were in some good positions and we threw it away. I'm sick of saying we showed good character.

"We seem to get ourselves in to good position score a good try and then give them a chance.

"I thought our goal-line defence was really good and probably the best we've been. We needed to be efficient with the ball and we weren't."