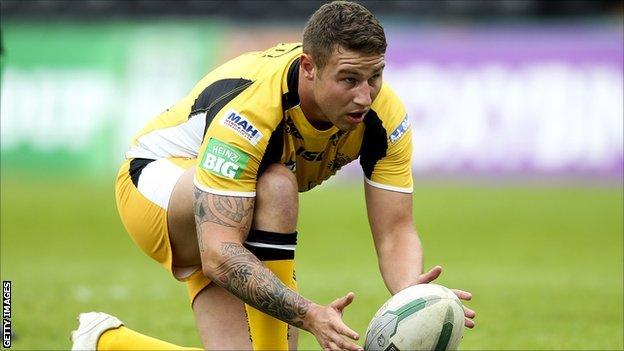 After the break, Broncos extended their advantage with Chris Bailey and Craig Gower's converted tries coming either side of Grant Millington's effort.

It was a huge blow for the Broncos who had looked on course for their fourth win of the season and a result that would have lifted them off the bottom of the Super League table.

And having had a 30-16 lead with only 10 minutes remaining, they will be left ruing their inability to close out the game.

London's afternoon started well with Mendeika crossing as early as the sixth minute thanks to Michael Witt's pass.

Wheeldon's try, created by Gower's no-look pass, was converted by Witt, but Ellis missed Chase's effort so the score remained level at 10-10, before Melling's converted try on the overlap before the break.

Witt then sent over a 40-metre penalty for the hosts and converted Bailey's try following Gower's break, before Millington's converted effort for Castleford.

Having converted both of those tries, Ellis kept his composure in the last minute to slot the penalty that earned the Tigers their first away point since April 2012.

"It's been a real muck-in week here and we just had to get through to the end of it.

"We have had a really progressive week and I am confident there are some good times ahead for this group.

"I was delighted with our effort and we were fantastic all the way through. I don't think anyone can say we were ever safe in that game and we always had to work hard.

"We're not the sort of team who can come up with an outstanding performance from one week to the next.

"It thought it was poor from the start to nearly the finish. We had some good bits in there but we're just not tough enough. We have a really long way to go and I thought we were poor and got a point we didn't deserve.

"I didn't think we'd earned the right to go for the win.

"We are delighted to have got a point but it feels like a loss. London will feel hard done by and it's justified because we didn't play well enough to earn that point."