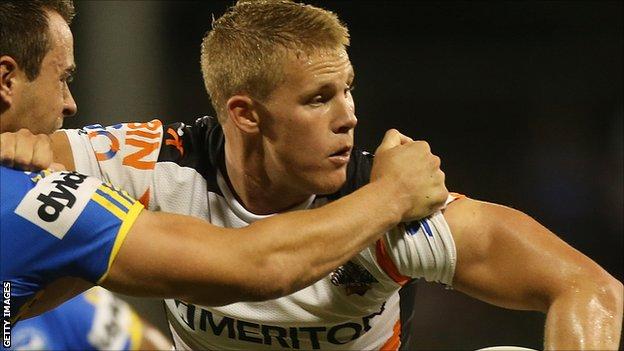 Hull FC have signed Wests Tigers scrum-half Jacob Miller on a two-and-a-half-year deal as a replacement for the departed half-back Brett Seymour.

The Airlie Birds have sought cover to add to Richard Horne and Daniel Holdsworth, and allow hooker Aaron Heremaia to return to his natural role.

"I am really excited about the opportunity to play in Super League," said 20-year-old Miller.

"It looks like it's a great time to be joining. They have a strong roster."

Seymour was released by Hull after he was involved in a car accident and placed on compassionate leave.

Miller will arrive in East Yorkshire once the relevant visa has been acquired.

He scored two tries in nine games for Wests, with four of those appearances coming in 2013, and was a Toyota Cup winner with the club's youth grade.

"It's a timely acquisition for us in a position we have been looking to cover for some time now," said Hull coach Peter Gentle.

"Jacob is a player that has all the attributes to be a quality half-back and we feel can really benefit our side, as well as improving his own game."