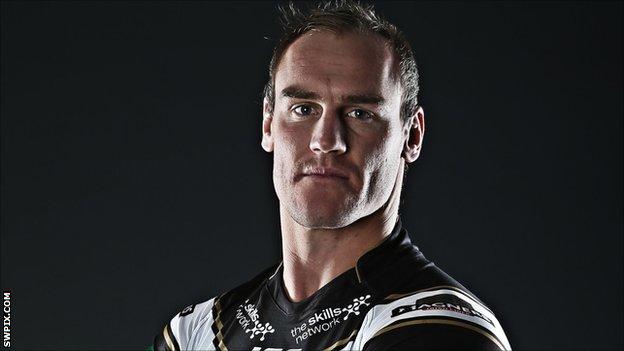 Gareth Ellis' first try for Hull FC helped book their place in the last eight of the Challenge Cup at the expense of Wakefield Trinity Wildcats.

Richard Horne put the hosts ahead before Ellis' score, and Kirk Yeaman's try ensured the Airlie Birds went in 16-0 up at the break.

However Pitts ran in another late score to seal the victory.

He was head coach for four seasons before joining Wakefield in 2011.

Victory came at a cost to Peter Gentle's side, as Liam Watts and Richard Whiting both picked up leg injuries.

The loss of the former failed to disrupt the hosts' rhythm, as Ellis and Shannon McDonnell created Horne's score, and the latter, signed from Hull KR in the winter, was also at the heart of Ellis's effort.

Wakefield rallied after half-time but it was Hull who struck first, Pitts supporting Horne to go in, before Lauitiiti got the visitors on the board when he collected Paul Aiton's ball to crash in.

Pitts rounded off the night's scoring when he dabbed down a bouncing ball to steer Hull comfortably through.

"It's a really satisfying win. It means a lot to us to get through. We treated it as our biggest game of the year and to win in the fashion we did is very pleasing. We had to dig in, having two interchanges for the majority of the second half.

"I thought our defence was outstanding. Wakefield are very dangerous with the ball and, if you look at the last month, they have put good points on Wigan, Warrington and Catalan.

"To only concede one try makes me very proud of them. I thought our guys were fantastic."

"I thought they defended really well. We've consistently broken down opponents this year but at times we struggled to make inroads tonight.

"I felt we needed to take every opportunity that came our way and we didn't do that.

"I really applaud our effort in the second half, we upped our defensive effort and gave it everything we possibly could to break them down but they defended well. I thought their big players really stood out for them tonight. Sometimes you just get beaten by a better team."