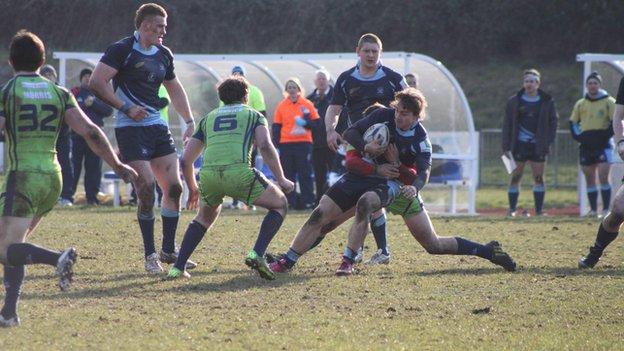 Gloucestershire All Golds chairman Lionel Hurst says their Challenge Cup fourth round draw with Salford will give the club a much-needed boost.

The All Golds, who are in their first season in semi-professional Championship One, will play host to the Super League outfit on the weekend of 20-21 April.

It is the furthest the university side have side progressed in the cup.

Hurst told BBC Gloucestershire: "It's the reward for all the hard work. "

He continued "The roar that went up from our office [at the draw] - it was sheer delight and joy.

Gloucestershire coach Brad Hepi played for Salford City Reds in 2000 while the brothers of Reds prop Jordan James both play in the All-Stars academy set up.

"It gives us a tremendous financial boost and it raises the profile as well.

"We're getting great support from the media and the sport is growing. On all fronts, it's a huge boost."

After passing initial checks, the All Stars have been granted permission by the Rugby Football League to host the game at their Prince of Wales Stadium in Cheltenham, which has a capacity of around 1,500.

And Hurst is confident his side, based at the University of Gloucestershire and coached by former Red Brad Hepi, can put in a competitive performance against Salford, who sit two tiers above them.

"We've got some tremendously competitive boys so Salford must not underestimate us," he added.

"It's a great leveller and our lads will be going out there to prove themselves against mighty opposition."