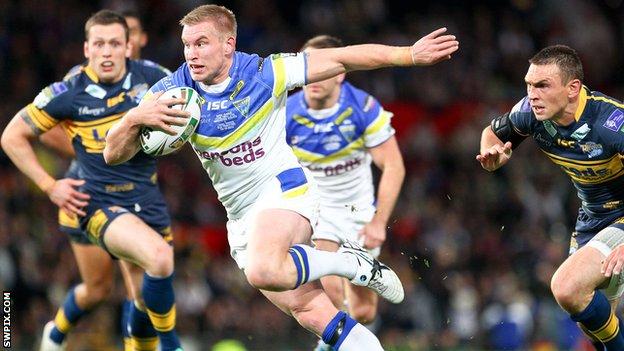 Warrington's Mike Cooper believes Sunday's meeting with champions Leeds has the potential to be the best match of the Super League season so far.

The Wolves met the Rhinos in both domestic finals in 2012.

"Sunday night will probably be one of the best games, if not the best, of the season so far," forward Cooper, 24, told BBC Radio Merseyside.

"The two teams from the Grand Final last year will be going at it again and we're really looking forward to it."

at the expense of Leeds, who gained revenge for their Wembley defeat by just over a month later.

Wolves coach Tony Smith said the memory of losing at Old Trafford - having led the Grand Final early in the second half - is still fresh, but he will not personally use that as motivation when the two teams meet at Headingley at the weekend.

"We would have liked to have performed a bit better on the night, but nothing that we do on Sunday can change what happened in the Grand Final last year," said the Australian.

"As a coach, I don't use those sort of occasions as motivation for the next game, but some players will. Some players will look back at it and use it as their motivation, but I don't dwell on what's happened in the past.

"Hopefully we can perform to the levels we set for ourselves, and if we do that, we know we'll be OK."

Third-placed Warrington are two points and four places above Leeds, although Brian McDermott's side have two games in hand on the teams around them in the table.

Cooper added: "There's always a lot of talk about players like Ryan Hall, Danny McGuire, Rob Burrow and Kallum Watkins, but I think the [Leeds] pack has shone through in the last couple of weeks.

"They've been led by Jamie Peacock again and I think he's had a really bright start to the year. Brett Delaney has been in great form too.

But Leeds must do without prop Ryan Bailey, who has been after being found guilty of two offences in Monday's win at Catalan Dragons.