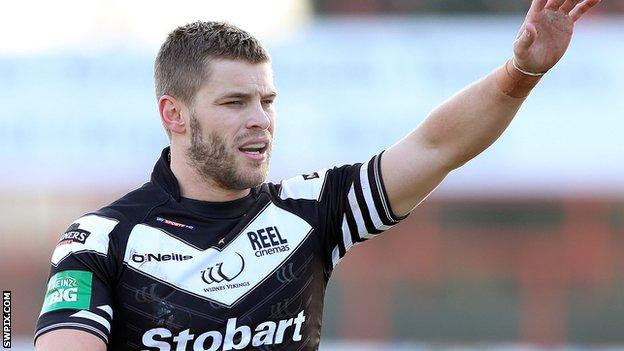 Patrick Ah Van and Lloyd White also crossed for struggling Widnes, who had been thumped 62-4 at Wigan in their previous outing six days earlier.

Widnes cause a derby upset

Warrington won all three Super League fixtures against Widnes in 2012, scoring 166 points in the process and at least 40 in all three games

Chris Riley (2), Rhys Evans and Richie Myler scored for the Wolves, who led shortly after half-time but could not hold off the Vikings fightback.

Warrington, victors over then-leaders Huddersfield seven days previously, missed the chance to move level on points with Wigan, who are now at the summit following their win over St Helens earlier in the day.

Widnes were boosted by the return of England second-rower Gareth Hock, who had been missing for their previous two matches, and he proved instrumental for the Vikings once again.

The home side led 12-6 at the interval against an off-colour Warrington, who made numerous errors in the first 40 minutes, with Ah Van and Hanbury touching down for the hosts either side of Riley's reply for the Wire.

Young centre Evans restored parity, capitalising on a high kick from Myler, before the scrum-half crossed himself after good work from Ben Westwood and Stefan Ratchford.

Flynn went in at the corner for the first of his two tries to bring the scores level again at 18-18, before Ah Van kicked a penalty to put the Vikings two points clear.

The lead was stretched further when Hanbury burst clear of Joel Monaghan to notch his second score, before White put the result beyond doubt, running in from 40 metres to score.

Riley's second try from Ratchford's arrowed pass was no more than a consolation as winger Flynn sealed the game with a sixth Vikings try, while Ah Van maintained his perfect kicking record by slotting over a seventh successful goal.

"We still need to look at the second-half start but we were solid. Warrington are a tough side and difficult to break down but we did.

"When you think about the history of the club, the fans want this game and so do we - we are notching a few big scalps off. We are putting our mark down and building our confidence.

"I thought Warrington were really good and had a go at us but we stuck in.

"There's plenty of players who were impressive today. Rhys Hanbury was great but our best player on the field was Jon Clarke. He was outstanding - absolutely unbelievable.

"We are getting better and better. We have some options and no one is guaranteed a spot. We are generating competition and the players want to keep the jersey."

"I don't think we played well enough to win that game. We got out-enthused and didn't control the game. We had a period after half-time where we could have taken control but we weren't able to do that.

"The enthusiasm of Widnes was terrific. Their support was great and defence was pretty solid.

"They have gone back to the drawing board and they deserve all the credit they will get from this victory. Widnes were better and deserved it.

"It was the Gareth Hock show - he was the best player on the field and came up with some big plays and he was great for them. He created turning points for them and he comes up with massive plays. He was so instrumental."