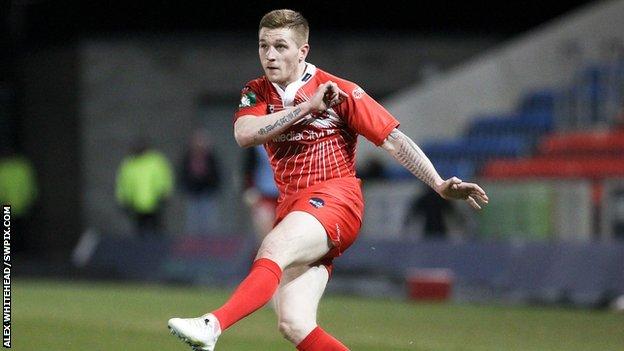 The Giants levelled with two quick tries from Craig Kopczak and Danny Brough to add to first-half tries from Shaun Lunt and Jermaine McGillvary.

But Sneyd's drop goal six minutes from time earned the Reds only a second win.

Huddersfield had already been knocked off top spot in Super League by Catalan Dragons on Thursday night and, by the time they kicked off at the City of Salford Stadium, Wigan's derby win over St Helens had dropped them to third.

New Salford centre Gaskell, who has joined the Reds on a season's loan from St Helens, marked his debut with a sparkling 40-metre try after only four minutes.

"It was a deserved result because we were the better team. Huddersfield threw everything at us and I was worried when they scored two quick tries to make it 20-20.

"But Marc Sneyd took a smart one pointer which took them by surprise.

"I hope Lee Gaskell starts every game like that. He is a quality player but a young man who still has a lot to learn.

"Marc and Lee used to oppose each other at youth level and they showed today they are both talented Super League players."

"We looked like we had never been on a field together at times but, credit to Salford, they did not give us anything.

"In life you get what you deserve and we came up against an enthusiastic and energetic team.

"I am disappointed all round defensively and offensively although Eorl Crabtree was very good.

"It's easy for an ambitious team like us to play the Wigans and Warringtons but we need a similar attitude against the Salfords and obviously our attitude was not right."