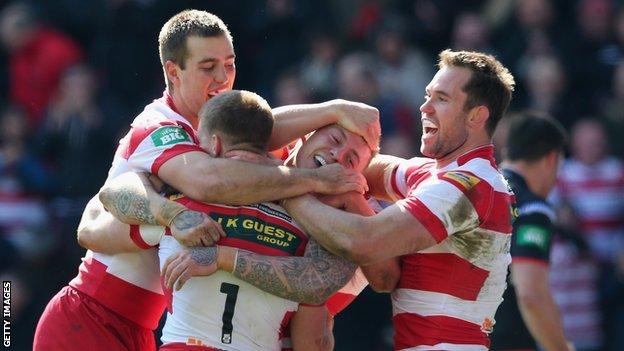 Tries from Pat Richards, Sam Tomkins and a length-of-the-field effort by Josh Charnley put Wigan 18-0 ahead.

Paul Clough, Francis Meli and Tommy Makinson all crossed for the visitors as they fought back bravely in the second period at the DW Stadium.

But a score from the impressive Dom Crosby and a second from Richards made the game safe for the home side.

Surprise defeats for Huddersfield at Salford and Warrington at Widnes left Wigan and Catalan Dragons leading the way with 13 points from nine matches, although the Warriors have a vastly superior points difference.

Wigan have scored more tries (52) and kicked more goals (39) than any other team in Super League so far during the 2013 season.

Shaun Wane's side had won three of the four fixtures with Saints last season and they would claim the bragging rights again in their first meeting of 2013.

The foundation for their success was laid in a first half in which they were simply more inventive and more clinical than their opponents.

They went ahead when a break from centre Darrell Goulding was stopped by Saints full-back Makinson, who was then caught offside from the following play-the-ball.

From the resulting penalty, the hosts spread the ball out wide quickly to Richards, who dived over in the left corner.

Scrum-half Matty Smith, in fine form against his former club, was the architect of Wigan's second score.

He broke the line to send Jack Hughes clear, and the young second-rower fed Tomkins, who touched down in front of the visiting fans to claim a try for the fifth derby in succession.

St Helens, who had won on their three previous league outings, had plenty of field position but were unable to register any points in the first period.

The closest they came was during a spell of three repeat sets as the half-time hooter approached, although it eventually culminated in Wigan's Charnley becoming the first man to reach 10 Super League tries in 2013.

The England winger collected a high Josh Jones kick underneath his own posts and outpaced Meli in a 90-metre dash to the line.

Saints sparked into life after the interval and were on the scoreboard within five minutes of the restart as Clough held off two challengers to touch down under the posts, but prop Crosby raced onto Blake Green's pass to restore Wigan's three-score advantage.

A mix-up between Tomkins and Ben Flower inside the in-goal area earned Saints a set of six on the Wigan line, and when referee Richard Silverwood penalised the Warriors for offside, Meli barged over from the repeat set.

Jordan Turner's outstanding offload allowed Meli to set up Makinson, and suddenly the gap was down to eight points.

However, Richards showed a cool head, escaping Mark Percival's tackle to touch down in the corner for his second of the afternoon and settle the 230th meeting between these two fierce adversaries.

"I thought Pat Richards was far and away our best player. He's been consistently fantastic for us this year.

"He's in our leadership group and leads the team well. The way he played today was really impressive.

"I wasn't happy at half-time. We should have been a lot more clinical with our finishing. I said at half-time 'it's nil apiece' because they were never going to be dead and buried.

"We showed a lot of character but we were far from at our best."

"The effort and commitment was terrific but we let ourselves down with our defence, especially in the first 15 or 20 minutes.

"I thought offensively we stretched them plenty in the second half but the most disappointing aspect was our defensive performance.

"It was an enjoyable occasion. It's great to hear all the fans singing and the way both sets of supporters get into the concept. But it's two points at the end of the day."