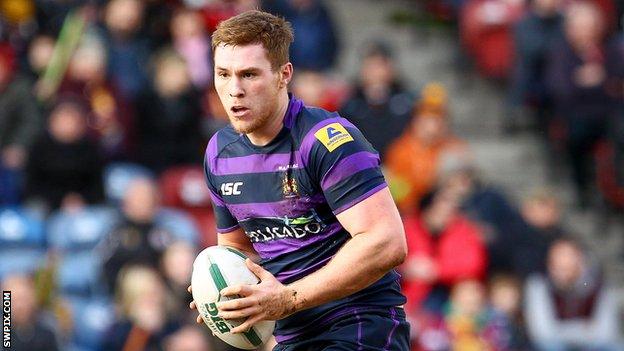 Wigan prop Scott Taylor is expecting Friday's derby between the Warriors and St Helens to surpass anything he has experienced in Super League before.

The 22-year-old will be playing in the fixture for the first time.

He told BBC Radio Manchester: "They've told me it's the biggest game of the season and I can only imagine what the atmosphere's going to be like.

Wigan, the Challenge Cup holders, book a place in the last four of the competition, with Brett Finch's individual score the key moment

Sam Tomkins scores one of the tries of the season as Wigan dominate their Magic Weekend meeting, although the match is marred by a 26-man brawl that sees Wigan duo Gareth Hock and Chris Tuson, plus Saints forward Shaun Magennis, all shown red cards

Saints secure third place in Super League with a five-try success against League Leaders' Shield winners Wigan, who lose hooker Michael McIlorum for the play-offs following his red card for a late hit on Anthony Laffranchi

England international Taylor added: "It's the one the fans want the most. It's about bragging rights for teams. When it comes around, everyone's got a lot of adrenaline and everyone's ready to rip into it."

The rivalry between Wigan and St Helens is one of the fiercest in English rugby league, which was exemplified by the four fixtures between the two clubs in 2012.

Four players were sent off, including three as a result of

Wigan comfortably won that game at the Etihad Stadium, as well as and also at the quarter-final stage.

St Helens, then under the stewardship of Mike Rush, in the final match of the regular season, although they were helped by the early dismissal of Warriors hooker Michael McIlorum.

Both sides are currently lying within a point of Super League leaders Huddersfield Giants, adding to the importance of their first meeting in 2013.

Taylor, who is hoping to on Monday, has admitted he will take a keen interest in how his former colleagues are getting on when they take on their local rivals Hull FC later in the day.

"It would be nice to watch that one," he said. "I'm so excited to have my first Wigan-Saints derby coming up, but it will be nice to sit down and enjoy a Hull derby.

"I've got a lot of mates at Hull KR and I know how big it is for those two clubs. I'll definitely be watching it and will be glued to the television like any other fan."