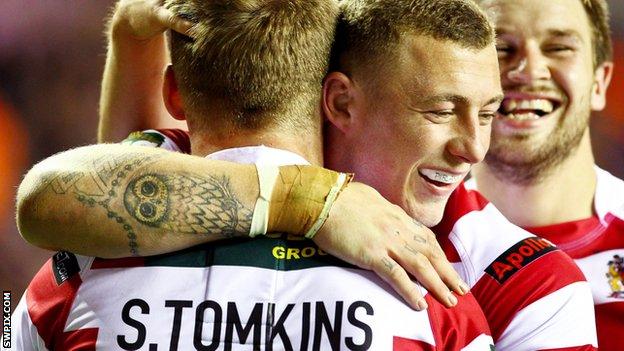 Four tries from Josh Charnley inspired Wigan Warriors to an 11-try rout of Widnes Vikings, to move within a point of Super League leaders Huddersfield.

Sam Tomkins helped himself to a hat-trick, while Pat Richards scored a try and kicked nine goals.

The hosts were 38-0 up at half-time as the visitors were blown away in a rampant first 40 minutes.

Meetings between the two clubs in the past have been close-fought encounters, notably during the 1980s when both contested silverware, but while Wigan have maintained their success in Super League, Widnes are still rebuilding under head coach Denis Betts.

Betts was a pivotal figure in the Wigan side as a player, but there was no compassion from Shaun Wane's outfit, and Betts's side had little answer to the Cherry and White onslaught.

It took eight minutes for the floodgates to open and the opening score came courtesy of birthday boy Tomkins, back in the side after missing the defeat by Leeds, as he linked up with winger Charnley after a driving run down the right.

Charnley, who now has 73 tries in 74 games for the Warriors, added his name to the sheet after Blake Green's smart run and pass, and another razor-sharp move across to the right gave him a second moments later.

The Vikings were struggling to contain the three-quarter line of Richards, Anthony Goulding, Thornley and Charnley, who latched on to Matty Smith's grubber for his hat-trick.

Patrick Ah Van was a centimetre of grass away from reducing the deficit when his foot was in touch, and it proved costly as Tomkins chipped and gathered to streak over for his second and Wigan's fifth.

Charnley unselfishly fed Tuson when held up close in, and grabbed his fourth of the night shortly afterwards to complete the first-half scoring.

Betts's face as his side headed for the tunnel betrayed his thoughts pretty clearly, and there was little more to cheer him in the second half.

Two minutes after the restart Farrell picked up Thornley's pass to go over, and after Smith's 40-20 kick provided field position, Richards added a try to his goalkicking haul from Tomkins' face-pass to take Wigan onto 50 points.

The lead was further extended as Wigan exhibited some dazzling play, working the ball from right to left for Thornley to score, although hopes of a third 'nilling' of the season were ended when White nipped in to add four to the Widnes score with four minutes remaining.

Sean O'Loughlin's injury was the only further concern for Wigan head coach Wane as he was withdrawn with a rib concern at half-time.

But Tomkins brought a smile back to Wane's face with a try to complete his own hat-trick on his 24th birthday.

"The challenge was laid down in the week and they took it on board. Some things were said [Denis Betts regarding Gareth Hock's unavailability under the terms of his loan deal] which made it easy for me. It helped our preparation.

"I don't think you could say anyone in my team is scared of anybody. Those childish comments hurt my players. They were really focused going into the game.

"What they did today was how they practised all week. We were ruthless in how we attacked. It was a great win but I'm not going to get carried away. It one of those games where a lot went our way."

"Wigan were that hot, it was quite scary at times,. They looked like they were on fast forward, whereas we looked like we were on pause. They just played the game so quickly and physically dominated us. They were very good tonight and scored some great tries.

"It wasn't a great performance by us but there were patches where we were just okay and then we'd break and they'd score.

"With the quality they've got on the edges, you make one mistake and you get hurt. We had too many people today who made mistakes, especially on our left edge. It was disappointing because I know we're a better side than we showed."