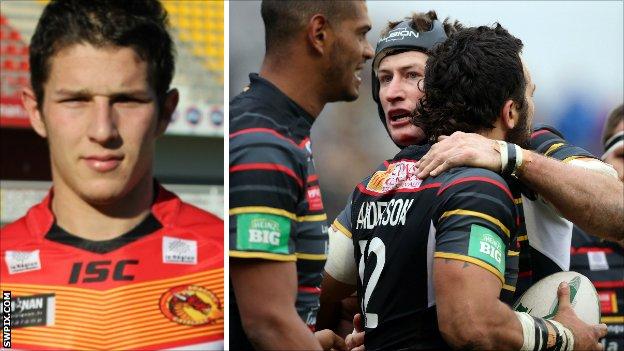 Bulls led at the break through tries from Elliot Kear and John Bateman, Julian Bousquet scoring for Catalans.

However Louis Anderson, Escare, Daryl Millard, Zeb Taia and Leon Pryce all crossed for the home side after half-time to secure the two points.

Escare found himself in the side following news that Brent Webb, the Dragons' summer marquee signing from Leeds, required surgery on a back problem.

Millard and Bosc have both filled in at full-back, but coach Laurent Frayssinous opted for Escare, who seized his chance as the Dragons maintained their 100% home record in Super League 2013.

The visitors, however, unbeaten in their last three games and with Super League's top scorer in Brett Kearney, came into the game in form and made a flying start.

Catalans had several former Bradford players in their ranks, with Steve Menzies, Leon Pryce and Olivier Elima all well acquainted with life at Odsal.

Steve Menzies was there to cover after Kearney had chipped through, but it was only a temporary reprieve as the visitors crossed soon after.

Kearney created the platform with a searing run, and after play developed, Kear dived over in the corner from Elliott Whitehead's exquisite back-of-the-hand pass.

The hosts came close to a response when Bosc threw a dummy to split the Bulls defence, but Menzies was stopped by Kear seconds after gathering and spilled.

Bulls extended their lead after another Kearney break, and with Sammut sniping, Bateman bustled his way through to score a second try, although Foster was unable to find the mark with his conversion attempt.

Bousquet's try from hooker Eloi Pelissier's pass reduced the deficit for Catalans going into the break, and the hosts showed their quality in the second period.

The catalyst for much of the Dragons' play was France international Pelissier, whose running and vision were key to their improvement.

His pass teed up Pryce who found Anderson to power over, and then debutant Escare profited from the Bulls' failure to deal with Pryce's high ball to score.

Taia's blast through a tiring defence and Pryce's dart from close in against his old club completed the scoring for Catalans.

"I am happy that we had the character to come back from 10-0 down again but there were different circumstances this time. Against Wakefield and Widnes we were not in the games mentally but tonight Bradford started really well and we had to play well to stay with them.

"I want to give credit to my forwards, who I thought were excellent. I felt that, once we got on a roll in the second half, we got on top of Bradford. I have to give Louie Anderson a big rap. He ran some excellent lines and defended really well on the edge."

"Morgan has a massive amount of pace. He grew in confidence in the second half and you could see what he can do. With William Barthau having played last week, both give us good options when we get injuries and that is something we never had before."

"In the second half they had a lot of double sets and they scored off the back of them. We didn't see the ball.

"We showed in the first half that, if you have good ball, you can test the Catalans but those double sets really took it out of us in the second half because we only had three props.

"We started to chase the game and force the ball and that makes it a really tough game to play."