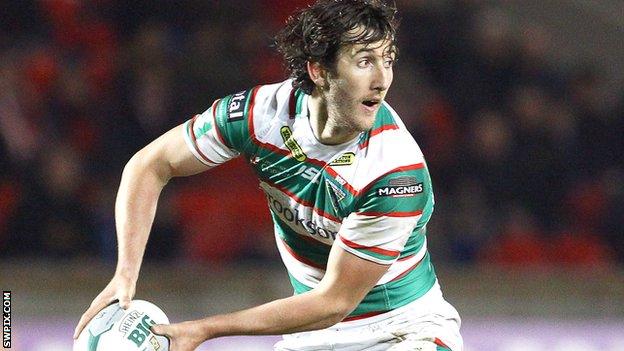 Huddersfield Giants saw their lead at the top of Super League cut to a single point after falling to a heavy defeat at rampant Warrington.

Tries from Chris Riley and Stefan Ratchford gave the Wolves a 12-point advantage at half-time.

Ratchford added his second score after the break, with Brett Hodgson landing all six attempts at goal.

Hodgson also crossed for a try of his own, while Danny Brough's penalty was all the Giants could muster.

Huddersfield remain top of the table but Warrington, who moved up to second, and St Helens, who beat Salford at Langtree Park, have closed the gap.

But there was no sign early on of the runaway victory to come. Errors were frequent in the opening stages as both teams struggled to cope with the blustery conditions at the Halliwell Jones Stadium.

Giants skipper Brough grasped the opportunity of an early penalty, awarded for a high tackle, but that was as good as it would get for the visitors.

Warrington enjoyed a sustained spell of pressure soon afterwards and were rewarded when full-back Hodgson created the space for Riley to dive in at the corner for the game's first score.

Hodgson was successful with the resulting kick at goal and added another two points with the boot to increase the advantage.

And Warrington took full control of the match when centre Ryan Atkins broke from deep and offloaded to Chris Bridge, who sent Ratchford over for a second Wolves try.

Home skipper Hodgson maintained his unblemished record from the tee a minute into the second period after Huddersfield were penalised for dissent.

Utility man Ratchford, starting at stand-off in the absence of the injured Lee Briers, grabbed his second after pouncing on a grubber kick and Hodgson got a try himself when he rounded off an excellent move from the hosts, completing a personal haul of 16 points against his former club.

"It was tough, traditional winter rugby league. It was probably as well that the cameras weren't here because they wouldn't have been able to see the ball.

"You've got to compliment everybody who was out there - both sides and the officials - because the conditions were extreme.

"The players really did put their bodies on the line and our boys handled the conditions exceptionally well.

"Our defensive effort was enormous. The big boys in the middle did a fantastic job and those fast backs came in and finished it off."

"It was pretty extreme out there. I thought every person who turned up today deserves some credit. Those that travelled across the Pennines deserve a medal and probably deserve a bit better than we gave them.

"We had a couple of lapses here and there and good sides take advantage of that. I also thought Warrington defended really well.

"I'm glad we played the game, although I'm not chuffed with the scoreline.

"We came here to do a job but we never really got going. I am blaming the conditions a bit but the sheer weight of possession got us in the end.

"Warrington handled the conditions better than we did. We were beaten by a better team on the night."