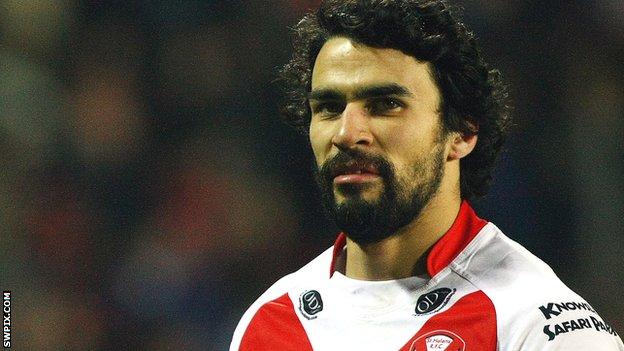 St Helens moved to within a point of Super League leaders Huddersfield after seeing off lowly Salford City Reds.

The game went ahead in difficult conditions, the Langtree Park pitch having passed several inspections.

Ade Gardner's try and a penalty from Saints debutant Lewis Charnock put the home side 6-0 ahead at the break.

Francis Meli crossed to put the game beyond Salford's reach, despite a late rally that resulted in scores for Liam Foran and Marc Sneyd.

St Helens are up to third in the table and are now just a point behind the Giants after their comprehensive defeat at Warrington.

The visitors, meanwhile, remain bottom with only one win to their credit this season.

Saints were missing hooker James Roby and the versatile Jonny Lomax, who because of injury.

But the hosts had enough in reserve to extend Salford's miserable run against them: the Reds have not won at St Helens since 1980.

Away day blues for the Reds

Coach Nathan Brown gave debuts to teenagers Charnock and Dom Speakman, but it was a familiar trio of captain Paul Wellens, Sia Soliola and Jordan Turner who sent winger Gardner over for the game's opening try.

Meli capitalised on a break from Josh Jones to add a second after the interval, and three successful kicks from Charnock put Saints 14-0 to the good.

But they experienced a nervy finish as Jordan James set up half-back Foran to cross and then Sneyd glided over to bring Alan Hunte's side within four points in the closing stages.

However, Salford were unable to register a first away win since July 2012 and St Helens held on for their second home victory of the season.

Former Great Britain coach Brian Noble, who has been strongly linked with Salford's coaching vacancy, was present at Friday's match as a guest of Reds owner Dr Marwan Koukash.

"I have never seen conditions like it and it's a credit to all those who helped get the game on.

"I was pleased with our guys' commitment and effort. Paul Wellens was great on his return and Nathan Ashe did well at hooker.

"Young Lewis has only just turned 18 and had one session with the team and Dom Speakman also made his debut. The youngsters did well in key positions.

"We had to tough it out and find a way to win. Salford were committed and it didn't matter whether we won by one, two or 20 points."

"I understood my role when I stepped in and I am happy with that Marwan will make a decision when he is ready.

"We were down to the bare bones at the end, but the performance was very pleasing and I thought we deserved something.

"Both sides rolled up their sleeves in the conditions and there was little between the teams. They had that little bit of quality to get over the line.

"In the first 10 or 15 minutes of the second half we needed to put pressure on but did not manage to do that and that gave Saints confidence, but I could not ask any more of our guys."