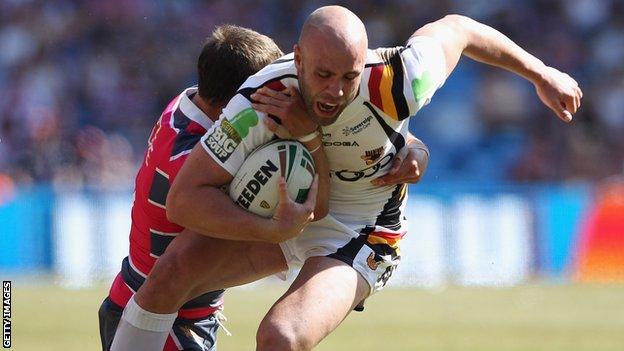 Adrian Purtell left the office of a top London cardiologist on Wednesday feeling like the luckiest man alive.

The 28-year-old Australian had been given the all-clear to resume his professional rugby league career, just 10 months after suffering a heart attack.

He admits he may still not play on for much longer, but counts every game he is able to play now as a blessing, after hearing the words from the specialist that he had been hoping for.

"I just thought get in," he said. "I expected the news as he told me in December that I was going well, but I knew his opinion, and my health could have changed since then."

I got a call from the Bradford Bulls centre as he walked through the doors of his home late on Wednesday evening after his train journey back from London. It is a home still covered in get well soon cards after a day last May that changed, and almost ended his life.

Those moments in Huddersfield were the worst. That was the worst time. I felt so lost and alone

Bradford had been beaten by rivals Leeds on a baking hot afternoon at Manchester City's Etihad Stadium - part of the sport's "Magic Weekend" that sees an entire round of fixtures played in one stadium over 48 hours.

Purtell had played and showered before starting to feel unwell as he left the changing rooms and boarded the team coach. "It is a blur," he recalls. "All I remember is a tough game, a disappointing game and then some pain in my chest. The next thing I know I'm in a hospital in Huddersfield and then in an ambulance back to the Leeds General Infirmary (LGI)."

He thought he was either severely dehydrated, feeling heartburn or suffering a random illness after a brutal 80 minutes of rugby league.

"The team doctor sat me down at the front of the bus and put me on a drip and oxygen," he stated. "I could see on the boys faces they were all shocked and worried but nobody could have expected what happened."

The coach got as far as Huddersfield before staff realised the extent to which his health had deteriorated. It pulled off the M62 at Huddersfield.

"All I remember is being in a hospital room and the doctor coming in, putting his hand on my shoulder and telling me I was having a heart attack," added Purtell. "They called an ambulance and took me back to Leeds."

The doctor's words came as an incredible shock. "Those moments in Huddersfield were the worst," Purtell added. "That was the worst time. I felt so lost and alone. I couldn't believe it. It was so hard to comprehend."

Purtell woke up the next day in the LGI to find his family were already flying over from Australia. His best mate, and room-mate Josh was the first to visit, followed soon after by his team-mates.

"Then I started to think about my rugby and that my career might be over too. I couldn't understand that either but in hindsight I was just lucky to be alive. It has changed the way I view sport but more importantly life."

His recovery was slow and steady. Purtell was not allowed to train again until December. "It was a really tough period," he said. "My emotions were very up and down. I had some good days and some days when I thought I'd never play again. I thought I'd probably move home."

The Australian revealed the health scare has been a wake-up call for him and his team-mates. "I am young, fit and healthy; I train five times a week and play at weekends," he said. "If it can happen to me it can happen to anyone and the lads realise that."

Purtell is ready for an immediate return but admits he may have to be patient to break back into an in-form Bradford side who are third in Super League. The key, he says, is to try and forget that it ever happened.

"I have made some changes to my lifestyle, improving my diet and staying better hydrated," he added. "But when I play the specialist says I just have to put it to the back of my mind."

His only career goal now is to complete the Bulls contract that he signed. That runs until the end of next season when Purtell will be 29.

"Realistically that might be it for me," he reasoned. "I just want to focus on this season and next with the Bulls and then will reassess and see if I want to carry on.

"At the moment I would love to keep playing but my body may say otherwise. This has been very stressful and my body may not react to sport like it did before."