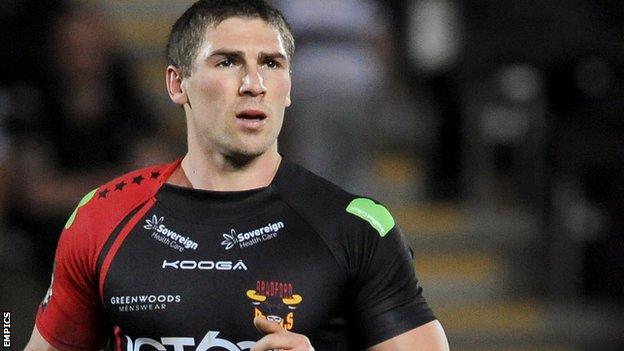 Bradford Bulls ran in five tries in the first half to set-up a comfortable victory over Hull KR at Odsal.

Jamie Foster, Brett Kearney, Elliot Kear, John Bateman and Jarrod Sammut all crossed over before the break to put the Bulls in control.

Hull KR scored either side of half-time through David Hodgson and Josh Hodgson.

Bradford centre Adrian Purtell was named among the replacements and made his first appearance since suffering a heart attack 10 months ago.

Forward Bateman and centre Foster returned for Bradford while hooker Josh Hodgson was named among the replacements for Hull KR after serving a one-match ban.

Bradford opened the scoring in the fifth minute, when they were awarded a scrum on the Robins' 40 metre line following an error by Evarn Tuimavave. The Bulls worked the ball left for Foster to dive over in the corner.

The home side then capitalised on a knock-on from Constantine Mika, when a kick from Danny Addy was patted back for Kearney to go over.

Hull KR replied as Michael Dobson and Greg Eden combined to send David Hodgson in, before Bradford re-established their advantage when Kear was first to a kick from Kearney.

Bradford went in 26-6 up at half-time after Addy chipped over the Rovers defence for Bateman to collect and score, and then a break-down on the left allowed Foster to send Sammut over.

Hull replied after the break with a converted try through Josh Hodgson but Sammut scored his second of the game after dummying his way over from 20 metres out.

Foster added a late penalty to lift Bradford up to third in the Super League table.

Bradford's Adrian Purtell on his comeback from a heart attack 10 months ago:

"There were times at the start when it felt like I might never get back but I've always had this goal to get back playing.

"I'm now glad we've got this game out of the way so we can focus on Bradford as a team, as we are playing really well at the moment.

"We can now put my misfortune 10 months ago behind us. I felt fine - the coaching staff have got me in really good shape - although the contact I've only been doing this week so that was a bit out."

"It's possibly my fault as we had three players who were ill and didn't train during the week, and some who were a bit busted and I made a decision to play them and they weren't at their best.

"I need to take the blame for playing those boys and you saw our performance in the first half just wasn't good enough.

"We gave away too many penalties and made too many errors and Bradford are a good side."