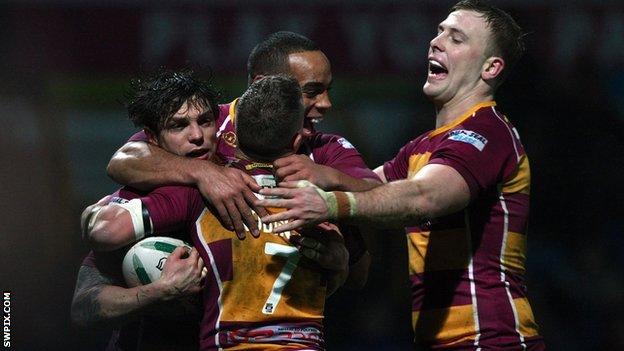 Leeds Rhinos coach Brian McDermott thinks their defeat by Huddersfield Giants will be extra motivation for this week's opponents, Wigan.

The Giants ran out 32-8 victors at Headingley on Friday.

"It is going to be a tough one because they'll be licking their lips and smelling a bit of blood," he told BBC Radio Leeds.

"We're used to it and we'll try and take whatever positives we can from this."

McDermott's side, who knocked the Warriors out of the Challenge Cup and the play-offs last season, host Shaun Wane's side on Friday.

In contrast to Leeds, the Warriors come into the game off a highly impressive 38-0 win over Catalan Dragons.

Meanwhile, the Rhinos coach praised the performance of Giants scrum half Danny Brough.

Huddersfield's captain scored 12 points and helped the visitors control the tempo of the match with his kicking game.

McDermott added: "Without his contribution they wouldn't have won, it is as simple as that.

"They weren't going to break us down with ball in hand given the conditions so it needed something different and credit to Danny Brough because he got some smart, deft kicks behind us."