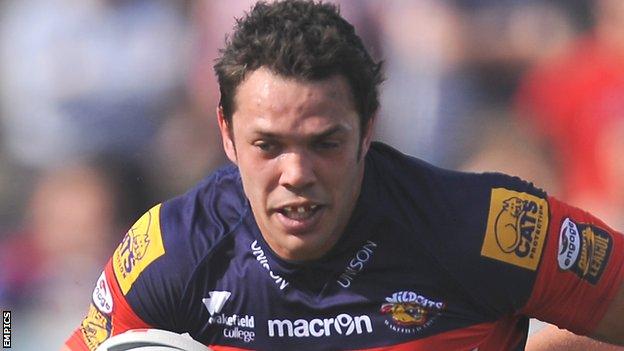 Salford climbed off the bottom of the Super League table by holding on to draw in a dramatic finale at Wakefield.

Going into the final 10 minutes at 22-22, Salford's Marc Sneyd looked to have won it with a drop goal, only for Paul Sykes to match it a minute from time.

Wakefield ran in five tries to Salford's four, Frankie Mariano getting his first of the season for the hosts.

Wakefield were angered however, by a 40th-minute Sneyd penalty that they felt did not go between the posts.

When I got the job on an interim basis I know jokes were made comparing me to Rafa Benitez at Chelsea. But every coach in sport, Sir Alex Ferguson apart, is interim. If you don't get success, you're out of a job

Winger Peter Fox, who scored for the fifth game in a row, Dean Collis, Danny Washbrook and top scorer Ben Cockayne, who now has seven for the season, claimed Wakefield's other four tries.

Sneyd's penalty on the half-time hooter gave Salford a four-point interval lead and that was doubled seven minutes after the restart when Murphy cashed in a free run to the line after a Richie Mathers pass was coughed up by Lee Smith.

But a Wakefield response was not long in coming as Washbrook slid over off another Tim Smith pass.

Sykes' third failure left the gap at four points and, when Smith limped off injured with 20 minutes left, Salford looked to be in the driving seat.

But Wakefield levelled when, with 13 minutes left, Cockayne celebrated this week's England call-up after good work from Ali Lauitiiti.

Sykes was again off-beam with the kick. but, after Sneyd had landed his late drop goal, Sykes finally found his range from open play for the decisive one-pointer.

Watched by Reds owner Marwan Koukash, in his first game in charge following Phil Veivers' sacking a week ago, caretaker coach Alan Hunte hopes he has done enough to earn another week in the Salford hotseat.

"I'm disappointed with the performance and a little bit angry about the way we played.

"We were lacking in certain areas and I'm looking at our senior guys. We made far too many errors and Salford worked really hard.

"Our enthusiasm did lift but the quality didn't. I think we knew we were good last week and the week before, and maybe felt like we could just turn up.

"Rugby league doesn't work like that. We had too many players who were not willing to roll up their sleeves and who were not at the standard we require."

"I've had a conversation with the directors in the last week and I'm happy with where I stand. Marwan has spoken to the lads and he's happy, but he won't let it lie with this and why should he?

"This is just another coaching role for me. I've coached at youth level, at Doncaster. It's all I've done, I love doing it.

"When I got the job on an interim basis I know jokes were made comparing me to Rafa Benitez at Chelsea.

"But every coach in sport, Sir Alex Ferguson apart, is interim. If you don't get success, you're out of a job.

"At the start of the week I said to myself I didn't want to be out of a job at the end of the week. Hopefully that's not the case."