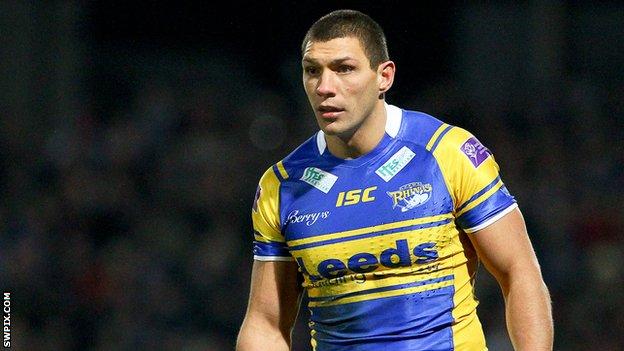 Champions Leeds Rhinos got the better of St Helens, Ryan Hall scoring two of their three tries in a 20-12 win.

Hall and Saints' Jonny Lomax swapped tries in the first half, but the boot of Leeds skipper Kevin Sinfield put the Rhinos 8-4 ahead at the break.

England winger Hall grabbed his second, after Kylie Leuluai had crossed for the visitors, to make the game safe.

And Leeds held on for a first win at Saints since 2008, despite Francis Meli scoring twice for the hosts late on.

St Helens, who gave a Super League debut to teenage centre Mark Percival, were hoping to take advantage of a Leeds side smarting from their in the World Club Challenge a week earlier.

But they made the worst possible start, with Jordan Turner sending the ball out on the full from the kick off and allowing Leeds an early set of six tackles from close range.

And when Saints were caught offside on their own line, Sinfield took the simple opportunity to put the Rhinos in front.

However, an error from Stevie Ward at a play-the-ball and a further infringement from Jamie Jones-Buchanan gave Saints easy possession.

Lomax, playing at full-back with Paul Wellens injured and took advantage to race in from 20 yards.

Another Sinfield penalty brought the scores level at 4-4 before he combined with Danny McGuire to send Hall in at the corner.

Revenge for the Rhinos

Unfortunately for Sinfield, his run of consecutive successful goal kicks came to an end at 41 - one short of the domestic record held by Featherstone's Liam Finn.

Willie Manu made a try-saving tackle to dislodge the ball from Ian Kirke's grasp shortly after the break, but Leeds would eventually stretch their lead when McGuire kicked for Hall, who tapped back for giant Leuluai to barge over the line.

And within two minutes Hall had his second try of the evening, although much of the credit had to go to Rob Burrow, who had mesmerised Saints with a jinking run in midfield.

The ball eventually found a way to centre Joel Moon, who fed winger Hall to touch down in the corner under little pressure.

Although Meli kept the game alive with two late scores, St Helens's wait for a home win in 2013 goes on.

And while Percival's performance was a bright spot - the youngster setting up both of Meli's tries - their injury curse struck again when Gary Wheeler was forced off with a knee injury.

"We had four young kids out there who had eight or nine games between them and they handled themselves well.

"It's going to get a lot better, I'm very confident of that. After our first game, we've got a lot better each week and there were periods today when we did pretty well against the best team in the competition.

"We got beat by a good side tonight but we scored three tries apiece so weren't a long way away. I thought the better side won the game but the young guys got a bit more experience."

"We had a fair amount of adversity with the motorway being shut. We only got the right kit on five minutes before kick off.

"On the back of last week, when we put a lot of energy - emotionally and physically - into the Melbourne game. The question was always going to be whether we could get up again but we did and it was very pleasing.

"In fairness, Saints had one or two fellas missing but it was always going to come down to how much energy we had in that game and it shows some character there."