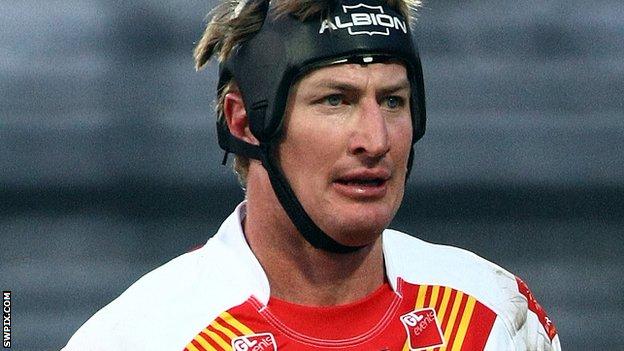 The visitors took a commanding 22-2 half-time lead, scoring four tries after Michael Dobson had given Rovers a third-minute lead with a penalty.

Catalans scored through Jamal Fakir to extend the lead after the break before Rovers fought back with four tries.

Further Dragons scores came from Menzies and Brent Webb, before Lincoln Withers pulled one back for Rovers.

The French side finished fourth in Super League last season and they made the perfect start to 2013 under new coach Laurent Frayssinous, seeing off a late Rovers fightback to earn an opening-day win.

I feel very happy to get my first win as coach. I was pleased with the performance we put in for the first 50 minutes of the game.

Jason Baitieri extended the lead and then forward Menzies - Super League's oldest player at 39 - crossed twice in the closing stages of the first half to give the Dragons a 20-point advantage at the break.

Fakir made the most of a mix-up between Hull KR duo Con Mika and Withers to add another try, before the home side fought back.

Former Leeds full-back Brent Webb touched down to seal the win for Catalan, who were without key duo Scott Dureau and Lopini Paea, before Withers completed the scoring with Rovers' fourth try of the match.

"Too many errors, forced offloads and penalties cost us. We worked hard in pre-season not to do those things in the friendlies.

"It was very disappointing because I really fancied our chances. The play count was two to one in their favour. They got the advantage and rolled on with it.

"The effort from the boys is undisputed. They tried hard but the first half cost us dear with the possession we gave away."

"I feel very happy to get my first win as coach. I was pleased with the performance we put in for the first 50 minutes of the game.

"After that we didn't respect the ball so we are not very happy about that, but two points is two points and I think we deserved the win.

"I think at the end we were tired. The benefit of our short pre-season will come at the end of the season.

"We travel every two weeks and the travel is tough. The combinations on the pitch could have been better but mentally they were ready to play. We will be fresher later in the season."