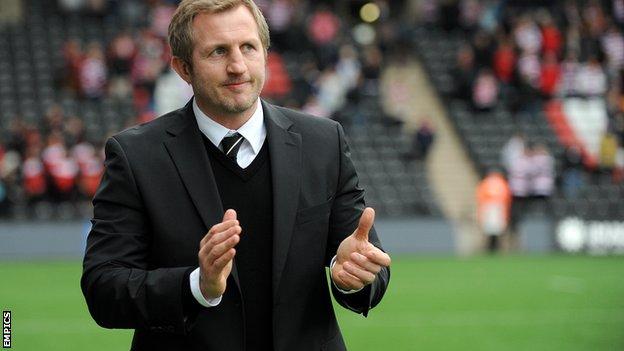 Head coach Denis Betts and three members of his coaching staff have extended their contracts with Widnes until the end of the 2014 season.

Assistant coaches Mick Cassidy and Dave Banks, as well as strength and conditioning coach Clive Brewer, will also stay at the Stobart Stadium.

Betts, 43, joined the Vikings in November 2010 after a spell coaching in rugby union with Gloucester.

He guided Widnes back into Super League in 2012 after a seven-year absence.

After gaining a three-year licence, the Vikings took time to adjust to a higher level and they finished bottom of the table.

If you have ambitions of achieving anything, what you need is consistency

"I'm really pleased that our chairman Steve O'Connor and chief executive James Rule believe I am the right person to continue this work and take things forward," Betts told the club website.

"If you have ambitions of achieving anything, what you need is consistency.

"We have taken some big strides and there is a lot of work still to do, but we are moving in the right direction and this can only be good for the players, the coaching staff and the club."

Rule added: "I have been immensely impressed with the performance environment that has been created by Denis and his coaching team.

"I am delighted that we have secured their services until the end of the 2014 season.

"When you consider that just 12 months ago, the club had to undertake the transition from semi-professional rugby into a full-time professional Super League organisation, the progress that has been made is nothing short of remarkable."