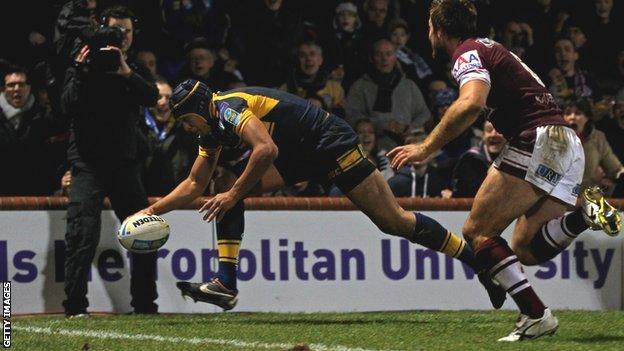 Leeds Rhinos will be without Ben Jones-Bishop for up to six months because of a blood clot in one of his lungs.

The 24-year-old winger was diagnosed with a pulmonary embolism during pre-season training and has been advised to avoid all contact for three months.

He will undergo a course of treatment before resuming full training.

World Cup around the corner

The RFL chief executive Nigel Wood may have his critics, but when he labels 2013 as "rugby league's most important year since Super League began" it is impossible to disagree

"I am looking forward now and doing everything I can to get back as soon as I can, once I am given the all clear," said the England Knights international.

"It is a relief to get it diagnosed and get treatment and to know that it is not a life-threatening condition.

"Generally I am in good health but as a sportsman you need to resolve these issues as soon as possible to make sure that you can perform to your maximum."

"It is a real shame for Ben that he will miss the start of the season," said Rhinos head coach Brian McDermott.

"He finished the season in great form and was a big player for us in our big games last season.

"We have no major long-term concerns this will impact on Ben's career and he will receive the best possible care to make sure the issue is resolved and he can resume playing."

The club confirmed that Jones-Bishop will not travel to Portugal for their warm weather training camp later in January.