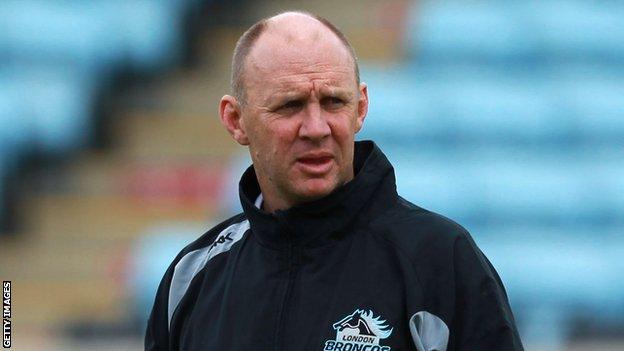 London Broncos head coach Tony Rea believes the club has the potential to be the biggest in Super League.

The Broncos have never won a major trophy, but finished second in the Super League in 1997 and were Challenge Cup finalists two years later.

Rea told BBC London 94.9: "The whole reason of being in London is we can be the biggest.

"We should be and will be the biggest. At the moment we are not that. We are quite a distance from that."

Professional rugby league was played in London in the 1930s and the sport returned to the capital in 1980 with the formation of Fulham Rugby League Club.

With the concentration of people living in and around London, it's obvious to see how big a club in the capital could be.

But with a sporting spectrum as diverse as its people, it's tough to break into the market.

There's a definite buzz of young people playing the game and new community clubs springing up, which are reaching more children than ever.

It is the enthusiasm in the undergrowth that gets people like Tony Rea and those involved in the game in London and the south excited.

But however far the game gets in London, the question mark continues to hover over the stability of the club long-term.

The Broncos need extra income to supplement the millions pumped in by owner David Hughes, whether it be through sponsorship, gate-receipts or another investor.

Because Hughes can't continue to fund the club forever all the good work could be instantly undone should he stop.

A good run in Super League, some exposure from a Challenge Cup run and a winning side could be the missing link.

In the 32 years since then, the capital's side have been known as London Crusaders (from 1991-94), London Broncos (1994-05) and Harlequins RL (2006-2011) and played at a number of grounds, including Craven Cottage, Crystal Palace Sports Centre, The Valley, Griffin Park and the Twickenham Stoop.

"It's tough to bring a sport into a big city," said Rea. "It's hard to bring the message, get the people and compete.

"If we can get through those things and come out the other side it will be due to the persistence and resolve of everybody involved in rugby league.

"I think the resilience and hard work over the whole period by everyone from 1980 will be rewarded."

Rea himself has played a leading role, having spent time as a player, chief executive and head coach of the club from December 1994 until July 2006.

The Australian returned to London to take interim charge of the club in July and the following month signed a two-year deal to remain as permanent coach.

He is convinced the club will grow because of the standard at club and youth level in London and the south east of England.

"I got sold the good message to come here," he said.

"I had the responsibility way back as a player as to how important this place is. I firmly believe it still has to be that.

"One of the wonderful things coming back [this year] has been to see not only what the Broncos, but the whole of London, are doing with rugby league.

"All those people working out there in clubs is really inspiring.

"It's what we wanted to get going way back in the early 1990s when I first came.

"That really drives and lifts you. We've really got to get the top end of it right.

"We've got to make sure the team is playing really well, sponsors are jumping on board and climbing all over us, and fans are coming out and people are proud of us.

"Medium to long term, we can probably grow better than any [other club] if we work hard enough.

"We will get our chance on top if we hold strong."

Meanwhile, the Broncos have confirmed their pre-season schedule.

They will face London Skolars and then travel to France for a six-day training camp where they will play Toulouse Olympique XIII and Catalan Dragons.

The Broncos start the Super League season with a home game against Widnes Vikings on the first Sunday in February.