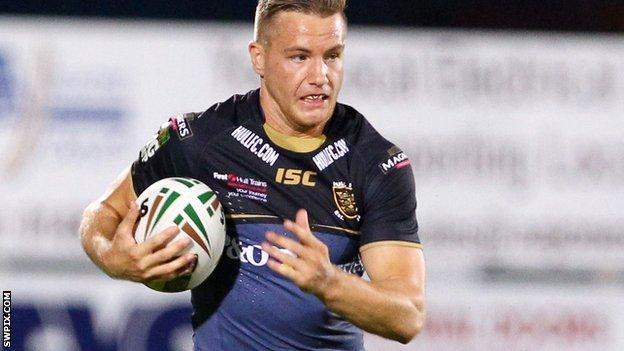 Bradford Bulls have signed winger Jamie Foster on a one-year deal following his departure from St Helens by mutual consent.

After scoring 402 points for the Saints in 2011, 22-year-old Foster struggled last season and finished the Super League campaign on loan at Hull FC.

He said: "I know I'm a good player. I know I can score tries and kick goals.

"I'm looking forward to getting my head down and producing the form that I know I'm capable of."

Merseyside-born Foster, who has appeared in two Grand Finals, signed a new deal with Saints in January and while on loan at Hull, stated his desire to make a comeback for his hometown club.

However, he now hopes working with new team-mates and coaching staff at Bradford will help him rediscover his best form.

"When I got the opportunity at Hull, it was a case of kicking on again and hopefully the same thing can happen again here at Bradford," he added.

Bulls coach Francis Cummins said: "Jamie has got some great experience already for such a young man but he's also got to prove a few points here.

"I think he did that at Hull and he needs to kick on again now.

"It will be hard for him as well, initially, to leave Saints after such a long time but he's got to take the next step in his career, as a lot of our players have had to do."