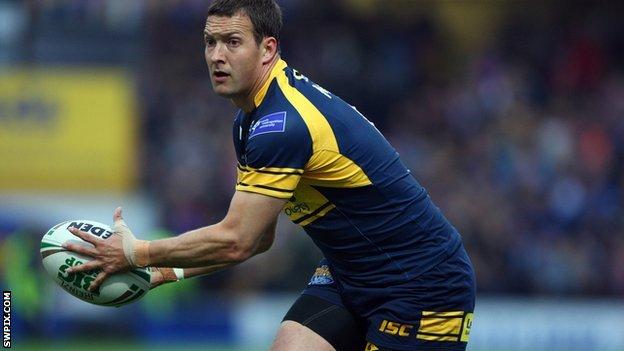 Leeds Rhinos stand-off Danny McGuire does not believe coach Brian McDermott has been given the recognition he deserves for leading the club to consecutive Grand Final successes.

"Brian's been unbelievable and doesn't get the credit he deserves," McGuire told BBC Sport.

"He and the backroom staff all deserve it because they work so hard."

McGuire added: "He's been through some tough times, he gets questioned every day, Leeds is a big club to coach and if you lose a game people are always going to question it.

"But he works hard and the boys were 100% behind him today."

Their route to the final was an arduous one, with Wakefield, Catalan Dragons and minor premiers Wigan overhauled en route to the showpiece event.

"I don't know why it is we wait until round 27 to show what we can do," McGuire continued.

"We just seem to excel when it matters and we're in a do or die situation.

"It's credit to the players and the team who want to be successful."

Having tasted success on the club's last five Grand Final outings, the Leeds-born half-back has been no stranger to silverware at Headingley.

We've got a good mix, we've got some experience and some young players that are going to take the team forward for the next few years to come

However at 29, McGuire is now among the senior members in the squad.

"You never get bored, that's why we're back here because we enjoy the feeling so much to go out there and win," he concluded.

"There's no better feeling than sitting here celebrating, I've been lucky to play with some great players and a great team.

"I didn't want to let the team down, and that's why we're a successful team, because we all work hard together, we all want success and we all do it for each other.

"We've got a good mix, we've got some experience and some young players that are going to take the team forward for the next few years to come.

"But I'd like to think us senior players have still got a few years in us yet."