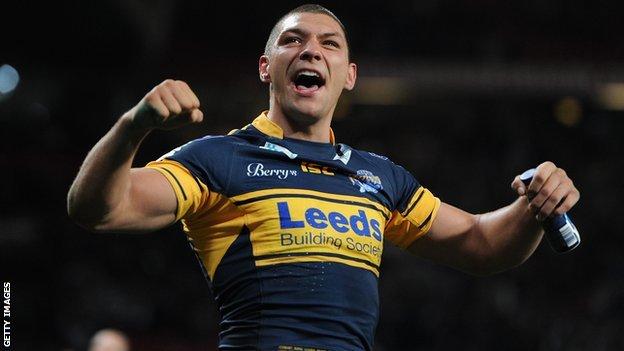 Leeds winger Ryan Hall labelled their Grand Final win over Warrington at Old Trafford as "a new page of history".

The Rhinos' top scorer got the game-sealing fourth try, his 27th of the season, to help his side to a 26-18 win - their fifth title in six years.

"People are comparing it to last year's," Hall told BBC Sport. "And we did it the hard way again.

"But we didn't come here knowing we were going to win. This is a new page in our history."

The result gave the Rhinos some payback for their 35-18 defeat by the Wolves at Wembley at August in the Challenge Cup final.

While this was Leeds' sixth Super League title in nine years, they have persistently failed at Wembley in that same period, having lost in six visits to the Challenge Cup final since last winning it in 1999.

And Hall admitted that the men from Headingley had to draw on their wealth of experience to bounce back from a third successive Challenge Cup disappointment.

"Mentally it was difficult," said the 25-year-old England international. "But we are the right bunch of players to come back from that.

"We got our heads around it and we set our mentality right and that is why we are here today."

Looking ahead to next season, Hall described the boost that being champions again will once again give to their whole squad.

"We'd like to make it easy for ourselves next time and finish first but we probably won't do that," he joked.

"What this does is gives us a great lift because it means pre-season is a great time for us.

"Knowing that we're champions helps you get out of bed for training at six o'clock in the morning when it's raining."

Leeds's reward is another meeting with NRL winners Melbourne Storm in the World Club Challenge in February.

So far, it is honours even, Leeds having beaten the Aussie side once, 11-4 in 2008, before losing 18-10 in a controversial rematch, also at Elland Road two years later.

And the Rhinos will be looking to defend their title, having started this long season with a 26-12 win over Manly, in which Hall's two tries won him the man of the match award, nine months ago.