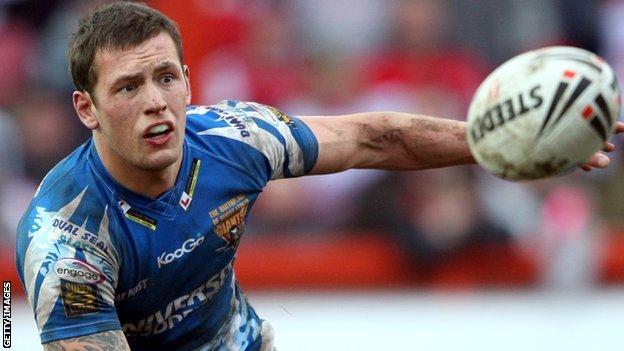 Leeds Rhinos hooker Shaun Lunt admits he has exceeded his own expectations after reaching the Grand Final.

The 25-year-old signed for the Challenge Cup runners-up on loan from Huddersfield, after falling out of favour at the Giants.

"I did not think I would be playing in a Grand Final when I moved and I am privileged to be playing in two finals in one season," he told BBC Sport.

"When you leave a club on loan, you don't expect to join such a good team."

Lunt now has the chance to win his first Super League winners' ring as his Leeds team-mates look to secure their fifth triumph in six seasons.

And the Cumbrian is hoping Leeds's winning mentality and big-game experience will be the key to beating Warrington on Saturday.

"We always knew we could make the Grand Final - especially with this group of players having done it last year," said Lunt.

"However, we were massive underdogs going into the Wigan game [in the semi-final] and, after beating them, we have the self-belief.

"It would be unbelievable to win it. When you are a kid, it is what you dream of. Just playing in these big games is fantastic."

Despite boasting a superb record at Old Trafford, Brian McDermott's men face a Warrington side who have already beaten them in the Challenge Cup final at Wembley this season.

With former Leeds boss Tony Smith in charge of the Wolves, the Aussie could become the first man to lead two different clubs to Grand Final wins.

However, Lunt maintains the focus will be solely on ensuring the Rhinos deliver another title.

"The Challenge Cup final is forgotten now, it is in the past," he said. "It is not about getting revenge because we made some uncharacteristic mistakes in that match.

"We need to go into this game as we would any other game and enjoy it. Hopefully we will get the win."

Lunt is scheduled to return to the John Smith's Stadium when his loan deal at Leeds comes to an end but he has not ruled out a stay at Headingley.

"Nothing has been agreed yet - I don't know what I am doing - but hopefully it will be sorted out soon," he said.