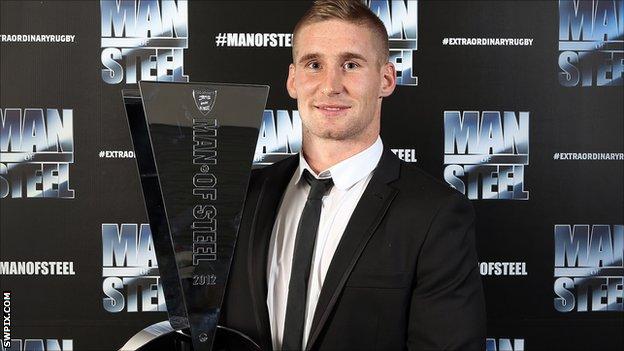 Wigan full-back Sam Tomkins has been named the 2012 Super League Man of Steel by his fellow professionals.

"It's not very often I struggle for things to say but I certainly was when I went onto that stage," said Tomkins.

Potter stayed on at Odsal in a voluntary capacity after being made redundant by the club's administrators in July and would have taken the Bulls to the the play-offs but for a six-point deduction for breaching Rugby Football League solvency regulations.

The Mike Gregory State of Rugby League Award for lifetime achievement went to former England captain Jamie Peacock, who will make a record 10th Grand Final appearance on Saturday when his Leeds side take on Warrington at Old Trafford.

He told BBC Radio Manchester: "When you start playing rugby and you get your end-of-season awards, the biggest one is always the players' player.

"They're the people you want to impress the most - your peers. There are some great players in our league and people like Jamie Peacock made it public that he'd voted for me.

"To think a living legend is voting for you to pick up such a special award, it's a little bit surreal."

Tomkins missed the with a knee injury, but for the upcoming autumn internationals.

Wigan, who won the League Leaders' Shield but were beaten by Leeds in the last four of both the Challenge Cup and the Super League play-offs, were named 2012 Super League Club of the Year.

Josh Charnley of Wigan picked up the Top try scorer award for his 31 scores while the Hit man accolade went to Wakefield's Danny Washbrook with 991 tackles. Roby was also named Top metre maker with 3,971m.