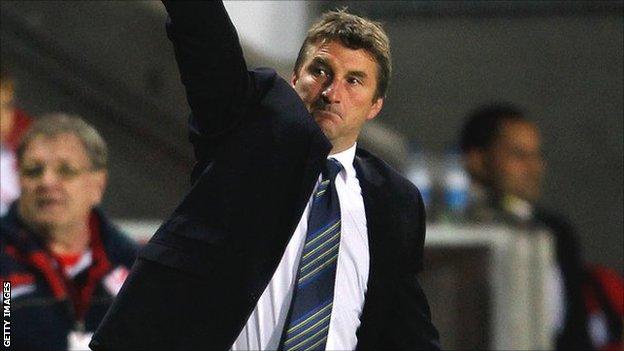 Tony Smith is confident his players can cope with the pressure of Warrington's first ever Super League Grand Final.

The Wolves face reigning champions Leeds at Old Trafford on Saturday, in a repeat of August's Challenge Cup final.

"It's a great experience, but then it's just a game of rugby league after that," Smith told BBC Radio Merseyside.

"You've got to make tackles, pass the ball and take catches, whilst putting aside that it's a Grand Final. If you can't do that, you probably succumb."

Roll on next Saturday. I came to Warrington to win things and that's what I've done so far. I want to keep winning

Smith, who led Leeds to two Grand Final victories in 2004 and 2007, continued: "It's getting the right balance. You get excited, without a doubt.

"The atmosphere is electrifying and I love going to the Grand Final, whether my team's in it or not, but it's even better when your team's in it.

"For the size of town that we are, the amount of supporters we get at home and away is brilliant.

Warrington claimed what turned out to be an emphatic in their semi-final on Saturday, although the Wolves trailed by two points at the break.

Centre Ryan Atkins said: "They really gave it to us in the first half, but we had a good 20-minute period in the second half where we got on the front foot and we got a few tries.

"We always knew it was going to be a physical game but we've come out of the other side and we've got the outcome that we wanted. Roll on next Saturday.

"I came to Warrington to win things and that's what I've done so far. I want to keep winning."

Warrington are aiming to become the first team to win the double since St Helens achieved the feat in 2006.