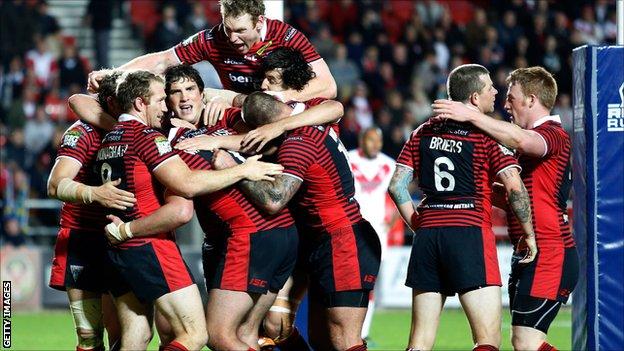 Wolves, who gained revenge for their earlier play-off loss to Saints, will face Leeds at Old Trafford on Saturday.

Chris Riley and Trent Waterhouse scored two tries apiece, while Simon Grix and Joel Monaghan were also on the mark.

Saints ran in four tries, two from Francis Meli and one for Tommy Makinson and Paul Wellens.

Brett Hodgson - influential as ever from full-back - scored 12 points with the boot in reply to St Helens wing Makinson who could only make one successful kick.

Wolves' progress to the final hands Tony Smith the opportunity to become the first coach to win the Grand Final with two different clubs, having won it with Leeds in 2007, and complete a double after August's Challenge Cup victory over the Rhinos.

For Mike Rush and Keiron Cunningham, warm applause from the Saints support was little consolation on their final match in charge before Nathan Brown's arrival for 2013.

No final for Saints?

St Helens have been regular fixtures at Old Trafford, appearing in each of the last six finals but have not won the competition since 2006

Saints picked up where they left off at the Halliwell Jones a fortnight ago, heaping pressure on the Warrington line, and were rewarded with a spectacular try from Makinson.

Slick passing saw the ball worked out to the right hand side and the 20-year-old dived clear of the covering Riley to touch down.

The visitors responded against the run of play, working a flowing move from right to left after Jon Wilkin turned over and Hodgson held the pass to release Riley to bring parity.

It was only a brief respite as Saints poured forward again, forcing a string of penalties inside opposition territory, and punished the visitors' indiscipline when Flanagan offloaded a looping ball for Meli to score.

Wire were shell-shocked and Saints capitalised when Wilkin's huge bomb was spilled by Hodgson under pressure from Louis McCarthy-Scarsbrook and Wellens gathered the loose ball for his 20th try of the campaign.

But Smith's side scored on the last play of the half, working the ball the length of the field for Lee Briers to tee up Grix on the last tackle and bring the Wolves within two points on the hooter.

The first half had been close, but the second period belonged to Warrington as they avenged their opening-round loss on home turf when it mattered.

Ryan Atkins dragged Makinson into touch to save what looked a certain try as Saints pressed with their first attack of the second half.

However, first blood went to Warrington when Joel Monaghan grounded a high Briers ball after his initial fumble went backwards and video referee Phil Bentham was happy to award the try.

Warrington struck again after Josh Perry conceded a penalty for offside inside the Wolves half, as Atkins raced clear and had Waterhouse up in support for a well-worked score.

Wilkin's high shot on Westwood gave Wolves another penalty and Waterhouse wriggled clear of two Saints tacklers to stretch out an arm for a second try.

There was a touch of obstruction about Atkins' angled run impeding Lomax in the build-up, but video referee Bentham was again happy.

Riley's second try of the game was met by jubilant celebrations among the visiting support and not even Meli's second try could deny Warrington's place in next weekend's Old Trafford showpiece.

"It's an enormous achievement for us, it's nice to be involved in Wembley for the last few years but to be in there and competing at the top of the pile in Super League is a big thing for the town and the club. I'm delighted for the owner and everybody involved in the club.

"We were good in the second half and we needed to be. I thought they were better than us in the first half. We had to lift some areas and we sure did.

"I know it must be difficult for Saints to miss out on something they've been very good at so they must be hurting and I feel for them."

"We were real pleased with our first half and we were probably a bit unlucky to concede just before half-time.

"I don't think we got one penalty in the second half - it was 5-0 in penalties in a semi-final - and, once you lose momentum in a big match, it's hard to wrestle it back. Warrington were fantastic and Trent Waterhouse was the best I've seen him.

"I would have taken being 40 minutes away from the Grand Final when we [Rush and Keiron Cunningham] took over in March."