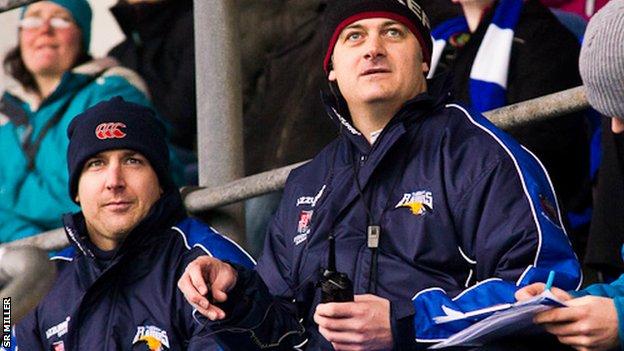 Barrow Raiders coach Darren Holt has paid tribute to his players for overcoming champions Doncaster to reach the Championship One Grand Final.

Raiders sealed victory by virtue of Andy Ballard's kicking, converting three of the four tries to establish a two point lead on the final hooter.

"It's no more than the lads deserve," Holt told BBC Radio Cumbria.

"I thought Doncaster were favourites and the boys have come here, done it tough and ground out the win."

The 22-20 win hands Barrow a free week to prepare for the final at the Halliwell-Jones in Warrington, and rest up players who picked up knocks at the Keepmoat Stadium on Sunday.

"There's superficial damage, Dan Toal has two or three stitches in his chin, nothing that will keep him out," Holt added.

"Liam Harrison has a niggling calf problem and got caught in the kidneys, while we'll see how Andy Bracek gets on this week.

"He tweaked a knee injury, but he turned it in training, nothing too serious, but we'll monitor him and see how he is going into the final.

"We'll probably have a light week and then ramp it up because the boys have trained hard and with intensity."