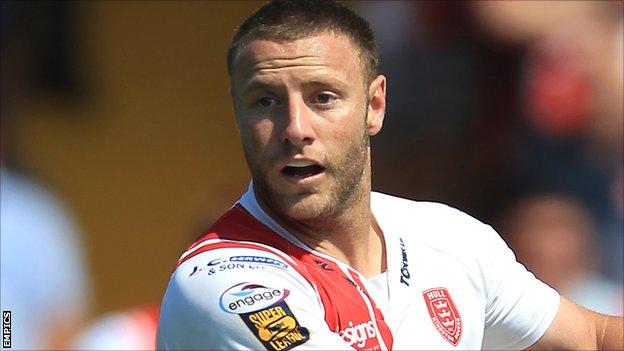 Half-back Blake Green says he had to think hard about his move to Wigan because he was settled at Hull KR.

Wigan agreed "a substantial settlement fee" for the 25-year-old last week, who had two years remaining on his deal.

"It was a tough decision to make, obviously leaving my friends," he told BBC Radio Manchester.

"But to move to such a big club with a very proud history and a winning culture, I'm looking forward to being a part of it."

The Australian half-back is seen as a replacement for Wigan's regular half-back pairing, Brett Finch and Thomas Leuluai, who are both set to depart the DW Stadium at the conclusion of the play-offs.

He made more than 40 NRL appearances for Parramatta, Cronulla and Canterbury before moving to Rovers in 2011 to be reunited with Michael Dobson, whom he knew from the Australian schoolboys side.

"It certainly came out of the blue [the move]," he added. "When this opportunity arose it was obviously fairly exciting on my behalf as a big club like that doesn't come around too often.

"I wouldn't have decided to make the transition and move if I didn't think I was ready for a challenge like that. I'm certainly going to have to work hard and I'm sure that I can be a part of the team's future successes."