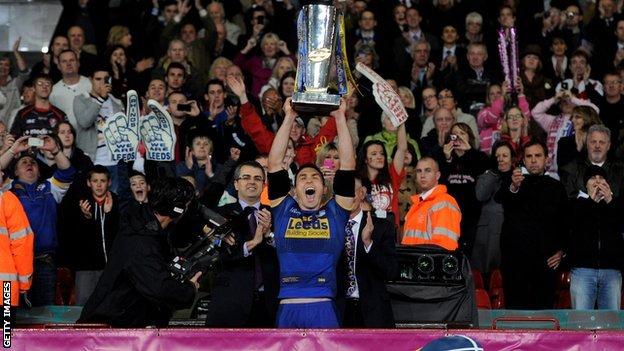 After a long, hard seven-month slog throughout the regular season, the first weekend of the 2012 Super League play-offs have already proved that this year's drama is far from over.

After surrendering the League Leaders' Shield back to Wigan, pundits expected to see Warrington at last make the Grand Final on 6 October.

St Helens' victory against the Wire on Saturday night has clouded the picture.

But there are six teams still in with a chance of making it to Old Trafford.

The two sides to bow out were Wakefield Trinity Wildcats, who could consider themselves a bit hard done by to go down 42-20 at local rivals Leeds on Saturday night, and Huddersfield, heavily beaten 46-10 at Hull in the other elimination play-off on Sunday.

With the two sides finishing seventh and eighth having now departed the competition, the form book also worked out in the first of the qualifying play-offs on Friday night when leaders Wigan strolled to a 46-10 win against fourth-placed Catalan Dragons.

But, in the second of the qualifying play-offs, for the other two sides finishing in the top four, third-placed Saints, so often winners in local derby conflict against Warrington, maintained their stranglehold.

The winners of the two qualifying play-offs, Wigan and St Helens, now skip a week, going straight through to the qualifying semi-finals.

But the losers of the qualifying play-offs get a second chance and meet the winners of the elimination play-offs in this weekend's preliminary semi-finals.

Catalan Dragons will now host Leeds this Friday night (1945:BST) in the first of the two preliminary semi-finals, before Warrington take on Hull at the Halliwell Jones on Saturday evening (18:45 BST).

This coming weekend's two preliminary semi-finals winners will then go through to meet the two winners of the qualification play-offs, but exactly who plays whom will be decided by 'Club Call'.

This was introduced three years ago, when it was decreed that the highest-ranked qualification play-off winners from week one, which this year will be league leaders Wigan, should be allowed to choose the identity of their semi-final opponents.

The other semi then pitches the lowest-ranked qualification play-off winners against the team not selected under 'Club Call'.

In the first two seasons that 'Club Call' was in use, the Rugby Football League still ended up with a Grand Final between the two teams who had finished first and second in the league.

But last year's final was between eventual champions Leeds, who had come fifth, and St Helens, who finished third - as both teams have done again this year.

If Catalans take advantage of being back on home soil in Perpignan by beating Leeds this Friday night, it would be a major surprise if Wigan did not pick them as their semi-final opponents.

But, if sixth-placed Hull caused an upset by winning at Warrington, who have a poor play-off record, that might also enter Wigan's thinking, especially if champions Leeds win in France.

The 'ClubCall' announcement will be made from the South Stand Lounge at the DW Stadium on Sunday lunchtime (23 September, 12:30 BST).