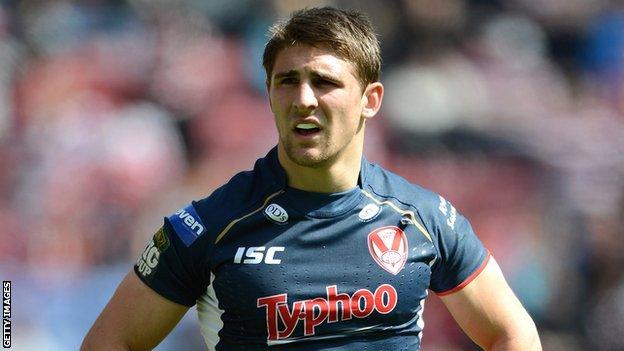 After Brett Hodgson broke the first-half deadlock on 22 minutes, converting his own try, two in three minutes just before the break from Sia Soliola and Tommy Makinson turned the game.

Makinson then added his second before two more tries in quick succession from James Roby and Francis Meli sealed it.

Makinson kicked four goals in a 16-point haul as Saints reached the semis.

The result leaves St Helens, beaten Grand Finalists for the past five years, just one win away from their 10th trip to Old Trafford in 15 years - and their seventh in a row.

Saints' second victory at the Halliwell Jones this season, where they are the only side to have won, earned them a week off as they booked a home tie in the semi-finals in a fortnight's time.

But Warrington, who finished comfortably ahead of third-placed Saints in the final table, must now rely on finding their form when they get a second chance next Saturday - against the winners of this Sunday's Hull-Huddersfield elimination play-off (22 September, 1845 BST).

Wire badly missed injured forwards Ben Westwood and Ben Harrison and were further weakened by the loss of Garreth Carvell as they suffered their eighth defeat in 10 Super League play-off matches.

Carvell came off after just two minutes following a three-man tackle, having suffered a back spasm, while Aussie forward Trent Waterhouse broke his nose but will be fit for next week.

"We did not attack as well as we needed to. We were impatient and did not ask enough questions of Saints when we had them in their area. We let them off the hook. It did not flow for us.

"We were good defensively for much of the game. But they took advantage when we slipped up.

"We were not at our best and need to be at this stage of the competition. You have your good days and some not so good. It was not disastrous but you need to be at your best."

"Defensively, we were outstanding against a quality side with some smart players.

"We withstood 20 tackles on our goal line. That was a true reflection of the determination this squad has got.

"Others have doubted our forwards this year but it was nice to prove people wrong. When questions are asked the players take it and come back a little bit stronger and hopefully that little bit better.

"Sia Soliola was enthusiastic and charged around at 3,000 miles an hour at first. But every time he goes on to the field he plays for the club and the town and I don't think you can ask any more of a player."