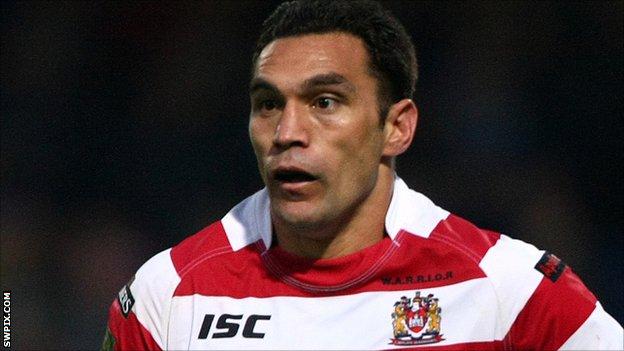 George Carmont's hat-trick moved Wigan Warriors to within 80 minutes of the Super League Grand Final with a one-sided victory against Catalan Dragons.

Catalan, who were blown away 44-0 in last season's play-off fixture, scored a sole try through Louis Anderson.

Scott Dureau landed the conversion for the Dragons.

Despite the defeat Catalan have a second attempt to reach the semi-finals next Friday on home turf, while Wigan enjoy a week to prepare for their club-call selection and the eliminator semi finals.

Shaun Wane threw a curveball when he named skipper Sean O'Loughlin at hooker in place of the suspended Michael McIlorum.

That selection freed Leuluai to continue his incisive partnership with Brett Finch at half-back, and Jack Hughes filled in admirably for the injured Gareth Hock.

Trent Robinson's Dragons were much-fancied given Wigan's notable absentees, and had a near full-strength squad but optimism dissolved within the first five minutes.

The hosts got off to a flyer when Carmont took Finch's superb cut-out ball on the last to break the Catalan line, and the Kiwi was in again minutes later, collecting a pass from Liam Farrell from close in after Finch had created the initial break with a cute dummy.

Duport's try for Catalan was chalked off after Dureau flick drifted forward, and Wigan responded by adding another score when Leuluai gathered Finch's short ball to dummy his way over.

Our completion rate was the best it's been for a few weeks but the most pleasing thing was our defence.

Catalans were nilled in last season's play-off encounter, but an Anderson try late on in the first-half ensured no repeat of that fate - Gregory Mounis offloaded to the former Warrington second-row, who prised a gap in the Wigan line and slid over the whitewash.

However it was Wigan who had the last word of the half when Darrell Goulding ran a perfect line from Leuluai's pass after Catalan coughed up repeat sets.

Wigan exerted their control with Farrell's score early on in the second-half, with the half-back pair of Finch and Leuluai again supplying the crucial passes.

Tomkins had a try ruled out for obstruction, but did get his name on the scoresheet when he gathered Matty Smith's floated chip ahead of Setaimata Sa to touch down.

Carmont collected his hat-trick, rushing through a tiring Catalans defence to seal Wigan's place in the elimination semi-final, before Charnley added gloss to the scoreline with length of the field solo try - his 32nd of the campaign.

"We were a bit passionate this week with what happened to Micky, we wanted to make sure we performed for him. It's really sad that he's not going to be there but we want to get there for him.

"He's [George Carmont] a quality player but he's a very proud man. I'd never offend him by keep asking him. I'm happy to do what he wants. He loves Wigan and he wants to make sure he goes out on a high. He's one of best professionals I've ever worked with.

"They're a fantastic team, the Catalans. The scoreline doesn't show that but that was a quality win. We've not been at our best recently I'm very pleased with that. It was a good performance. Our completion rate was the best it's been for a few weeks but the most pleasing thing was our defence.

"Wigan taught us another lesson in a semi-final. You build yourselves up for these games. We fought hard to finish in the four and get into these semi-finals. We're a better team but we didn't show it.

"It was pretty disappointing. Right from the first whistle, we struggled to defend their plays.

"I thought we took a lot of short-cuts which is disappointing and we just didn't work hard enough for the position on the ground."