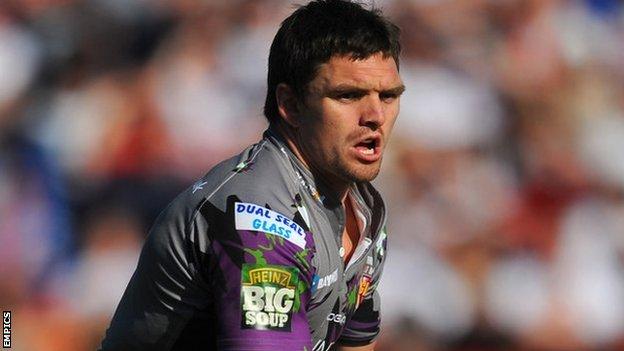 Huddersfield captain Danny Brough led the way with a 20-point haul as his team beat Leeds to find their form just in time for the Super League play-offs.

Newly-appointed Brough created the first two of his side's 10 tries, scored a solo effort and kicked eight goals as the Giants eased to their biggest Super League win over Leeds.

They were even a man short after Luke O'Donnell's 15th-minute red card.

We've a job on with Wakefield next week. I'm sure their coach Richard Agar will be looking at that and rubbing his hands together

After initially allowing play to continue, Alibert stopped play after the next tackle to enable Kirke to receive treatment and, during the delay, he delivered a warning to O'Donnell.

The Australian forward was then replaced but, several minutes later, was recalled to the field by the referee and, once Kirke had been carried from the field on a stretcher on his way to hospital, was shown the red card.

Huddersfield, who won 22-12 at Headingley earlier in the season, led 10-0 at that stage after a blistering start with two Brough-inspired tries in the first seven minutes.

Brough put full-back Leroy Cudjoe through a gap for the opening score before then hoisting a towering kick for left winger Luke George.

Even down to 12 men, the Giants were the livelier team, stretching their lead after 28 minutes when right winger Jermaine McGillvary palmed back Brough's kick to the corner for centre Michael Lawrence to touch down.

Leeds hinted at a fightback when skipper Kevin Sinfield combined with Weller Hauraki to get centre Jimmy Keinhorst over, but Brough crucially struck on the stroke of half-time, intercepting Carl Ablett's pass to score.

Brough's conversion made it 22-4 and he increased his side's lead with two early second-half penalties before second rower Brett Ferres broke clear to set up hooker Luke Robinson.

The Rhinos pulled a try back on the hour through winger Ryan Hall but Huddersfield went up a gear.

Stand-off Scott Grix touched down Brough's grubber kick and then flipped up a miracle pass for Robinson to claim his second.

Cudjoe finished off a glorious passing move to register his side's eighth to make it 48-10 before a late Leeds rally brought tries from Kallum Watkins, Ablett and veteran Jamie Peacock.

But, after completing their first Super League double over Leeds, Huddersfield can now go to the KC Stadium to face Hull next Sunday night (16 September, 18:00 BST) with a lot more confidence.

But to ship eight tries themselves a week later was not the ideal play-off warm-up for the reigning Super League champions ahead of next Saturday night's derby with Wakefield (15 September, 20:00 BST).

And, although Danny McGuire has a chance of being fit, they may now be without both Kirke and second rower Brett Delaney, who went off with a shoulder injury.

"My take on it was that Luke O'Donnell was initially put on report for a high tackle and sent off retrospectively. I don't agree with it.

"Can you send somebody off because you think something has happened five or six minutes after it took place?

"I appreciate the bloke was hurt and I wish him well but it's a physical game and, from the footage, I believe it was a clash of heads.

"The last 15 minutes didn't impress me at all. It's something we're going to be looking at. For 65 minutes I was over the moon but then some people clocked off."

"We've a job on with Wakefield next week. I'm sure Richard Agar will be looking at that and rubbing his hands together.

"The Giants got hold of that game early. It was never a contest after 10 minutes and the try just before half-time was a big one in terms of momentum.

"Ian Kirke lost consciousness for a few minutes. He wasn't in great shape so they've taken him to hospital for a check-up.

"Having lost Brett Delaney too, it caught up with us in the second half. We showed some resilience and I thought we had some outstanding performers. Jamie Peacock was absolutely immense."