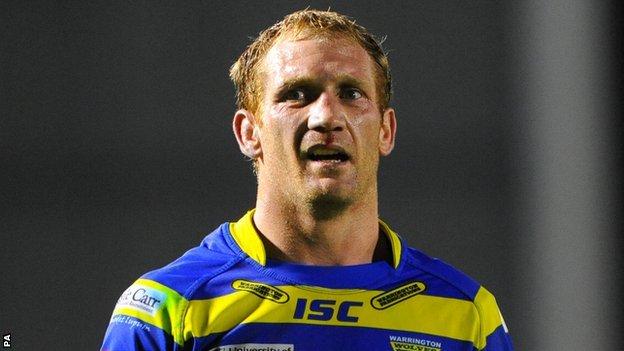 Second-placed Warrington closed the gap on Super League leaders Wigan to just one point with an emphatic victory over their title rivals.

Stefan Ratchford and Richie Myler added second-half scores for the Wolves, with Iain Thornley's effort scant consolation for the Warriors.

My boys stood up. I thought we were right on the money

The in-form Wolves dominated from start to finish against strangely out-of-sorts opponents as they completed the Super League double over Wigan for the second successive season.

The Warriors will still lift the league leaders' shield currently residing at the Halliwell Jones Stadium if they win their last three games of the regular season but Warrington are clearly ready to seize on any further slip.

The Wolves are already favourites to win the Challenge Cup - they take on Leeds in a fortnight - and this impressive triumph will give them a psychological advantage if these two rivals meet in the Grand Final.

They tackled danger man Sam Tomkins out of the game and easily nullified the threat of Brett Finch, who was returning to the Wigan side after passing a late fitness test on his hamstring injury but looked anything but fit.

Wolves' evergreen stand-off Lee Briers marked his 400th appearance by seizing on the first of a series of handling errors by the visitors and was only denied a try by a superb last-ditch tackle by Wigan centre George Carmont.

But the Warriors' defence was not able to regroup in time to prevent Westwood crossing wide out for the game's first try.

Chris Hill then bumped off Lee Mossop's attempted tackle to get loose forward Harrison over.

Wigan pulled a try back nine minutes before half-time when second-rower Hock forced his way over from a tap penalty five metres out.

But Warrington's lead was back up to 10 by half-time when Monaghan took Brett Hodgson's clearly forward pass to grab a third try.

An 80-metre score from centre Stefan Ratchford, who collected a wayward kick from Wigan scrum-half Matty Smith before showing a clean pair of heels to his pursuers, set the Wolves on their way after the break.

Carmont sent Thornley over for Wigan, but the score did little to upset the general pattern of the game and Warrington duly extended their lead when scrum-half Myler took Michael Monagan's pass to cross for a fifth try.

"It was a good effort, backing up from last week. It was a short turn-around against two very strong contenders.

"They're a talented team and keep you on your toes right though the 80 minutes, but we concentrated well and put in an energetic effort.

"I think the gauntlet was thrown down for our forwards this week with some comments that they weren't going to be bullied, but my boys stood up. I thought we were right on the money."

"Brett Finch is a seasoned pro and I thought he'd have got through it, but he was struggling with it.

"We weren't at the races, it was very disappointing. We didn't play how we trained all week.

"Our start was poor. We had a 37% completion rate in the first 20 minutes and that is absolutely unacceptable. The players need to work harder.

"We didn't trust the game plan we had and made too many errors against a quality team."