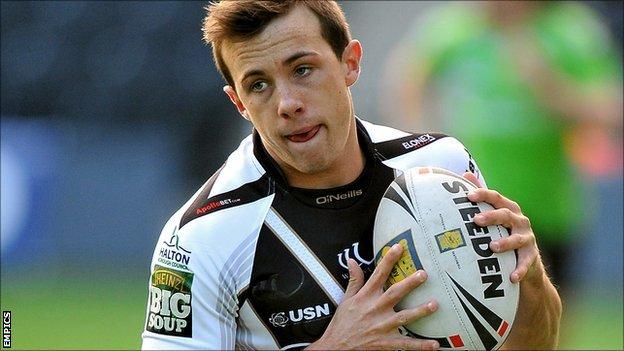 The Vikings have won three of their last eight matches, after tasting victory only twice in their first 15 games on their return to Super League.

"The Championship is tougher contact-wise, but the speed of the game and skill level in Super League is a lot different," said Craven.

"It's taken some adjusting but we're finally getting there."

Widnes remain second from bottom in the table with four matches left to play, but performances and results have significantly improved in recent weeks, the highlight being a 46-8 victory at Salford on 20 July.

You grow up dreaming of playing at places like Headingley

"Week by week, we're getting a bit better," Craven told BBC Radio Merseyside. "We've been working on a lot of things, but the main thing is that we've tightened our defence up quite a lot.

"We know that we can score points and if we tighten our defence up, we'll be a lot closer in games and we've been doing that over the last few weeks."

Widnes visit Leeds Rhinos on Friday and 20-year-old Craven is relishing the chance to face the current Super League champions.

"When we played at Odsal last week (against Bradford Bulls) there were 10,000 people there," he said. "I've been used to playing in front of 1,000 people.

"You grow up dreaming of playing at places like Headingley. I've got an opportunity to do that now so I'm quite blessed."

Meanwhile, Widnes full-back Shaun Briscoe has been granted a three-month testimonial by the Rugby Football League, in recognition of his services to the game.