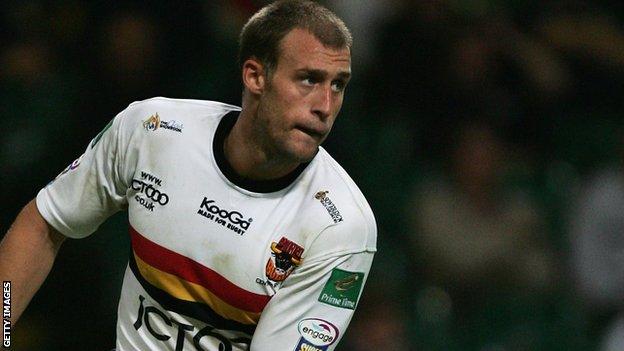 Crisis club Bradford showed that they have not given up on a play-off place despite their six-point deduction by the Rugby Football League with a determined victory against Widnes.

Michael Platt and Shaun Ainscough ran in two tries each as Bulls saw off a spirited Widnes at rain-lashed Odsal.

Back-to-back defeats against Leeds and Warrington either side of their RFL punishment had appeared to have dented Bradford's hopes.

But, after trailing 16-4 midway through the first half, they rallied to earn their fourth win in six games as the afternoon at Odsal ended in a second torrential thunderstorm.

In front of a crowd of 10,261, the financially beleaguered Bulls moved back to within two points of Hull KR, who they host in their next game on Friday night.

Widnes, who had won two of their previous four games while pushing St Helens and Hull KR close in the others, got off to a dream start.

Former Bradford winger Ah Van and prop Davies both crossed inside the first 10 minutes, converted each time by Hanbury.

Bradford responded through Platt, but Craven restored the Vikings' 12-point advantage with a 21st minute try.

The Bulls then hit back again with three tries in 12 minutes, from Kearney, Ainscough and Jeffries - his 100th touchdown in club rugby.

That put the Bulls ahead for the first time, only for Hanbury to score for Widnes on the stroke of half-time, reducing the arrears to 22-20.

Ah Van claimed his second for Widnes, converting it himself, but it proved to be just a consolation.

"It puts us in striking distance and might leave a few people a bit nervous because a team that has been deducted six points - do they want them in the eight?

"Have we warranted it and should we even have a chance to be in the eight? The players have worked very hard and there's a bit of work to do yet but it sets up for a fantastic game against Hull KR on Friday.

"It wasn't a game for the purist today. We had two dumpings of rain and you just have to adapt and adapt quickly.

"But Heath L'Estrange and Brett Kearney were very good for us, along with Ben Jeffries. They were probably the difference and gave us a little bit more variety in our game and more ball for us to utilise."

"We conceded some soft tries and switched off a couple of times but they are a really good side who deserve a lot of credit considering what's going on around them.

"We're still showing encouraging signs. We were even when we were getting heavily beaten.

"We are getting better. It was the same in the Hull KR game last week. We were good enough to win that game too."