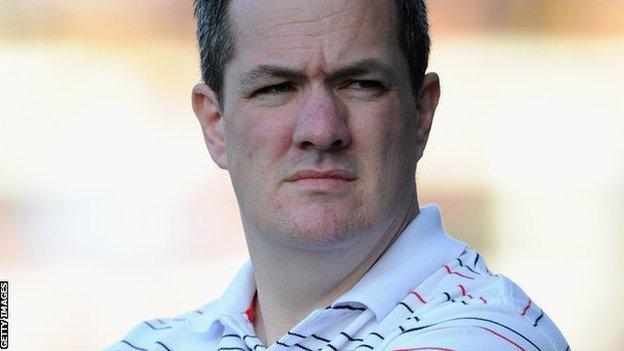 Nathan Brown's exit from Huddersfield Giants has left Mike Rush unsure of his future as interim coach of St Helens.

Brown is scheduled to take over as coach at Langtree Park next season.

"It's for the chairman to decide. Until then, the season carries on. There's a Grand Final on 6 October and we work towards getting into that," said Rush.

"He needs a long chat with Nathan because Nathan might want a couple of weeks to rest. I'm sure it's a very hard and emotional time leaving somewhere.

It's always surprising when you see Super League coaches leave

"Eamonn and Nathan need to get their heads together and then no doubt they'll tell me."

Rush was promoted from his role as academy director to take temporary control of first-team affairs following the departure of Royce Simmons in March.

The club were ninth in Super League at that stage, but under Rush and Keiron Cunningham, Saints have jumped to fourth in the table and have lost just two league fixtures, both to leaders Wigan Warriors.

Brown's move to St Helens was announced on 3 April, with Huddersfield standing top of Super League.

But the Giants' form has dipped in recent weeks. They have lost eight of their last nine matches in all competitions, a run of form that prompted the Australian's departure from the Galpharm Stadium ahead of schedule.

His final match in charge of Huddersfield was their Challenge Cup semi-final defeat to Warrington on Sunday.

"Rugby League is not like football to that degree, when you get a lot of shifting and changing.

"Normally it's comes at the end of a year, or if changes are going to happen, they're done early in the year, as we found at our club."