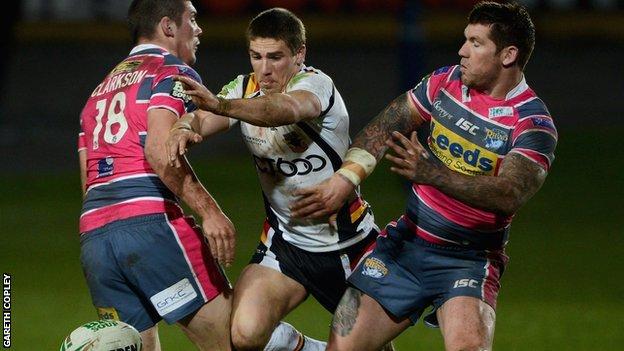 Leeds Rhinos are to allow Bradford Bulls to keep all the proceeds from the tickets the administration-hit club sell for Friday's derby at Headingley.

Bulls normally receive 10% of profits from tickets sold from their office but will now get all the money raised.

"The game has a collective responsibility towards those hit by the Bulls' financial difficulties," Rhinos chief executive Gary Hetherington said.

The Bulls currently have until 27 July to find a buyer after the administrators extended the initial 10-day period.

Bradford's interim chief executive Gary Tasker said: "This is a fantastic gesture from our neighbours and we appreciate it at this difficult time.

"In adversity you learn a lot about people and since my return I have been surprised by some of the calls I have received; however I am not surprised that Leeds Rhinos have made this offer."

Two days later they agreed to return to the club on a voluntary basis and helped the club to a 44-12 victory over London Broncos.

Meanwhile, Rugby Football League director of licensing Blake Solly revealed on Saturday that the 13 other clubs in Super League are currently split over whether the Bulls should be allowed to continue in the top tier next season following a buy-out.

Guilfoyle had previously stated that the party interested in purchasing the club would only do so with the guarantee that it would remain a Super League team.