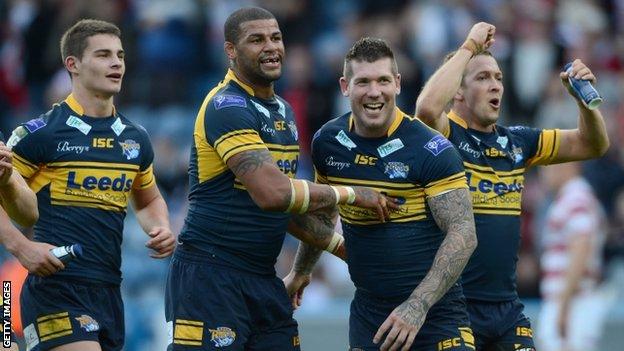 Leeds booked a third successive Challenge Cup final appearance at Wembley as they beat Wigan 39-28 in a thrilling last-four encounter.

The World Club Challenge holders and last year's Super League winners showed all of their big-game experience to stun the current league leaders.

Seven tries to Wigan's five proved the difference as the Rhinos avenged last August's final defeat to the Warriors.

They meet the winners of Sunday's game between Huddersfield and Warrington.

Captain Kevin Sinfield kicked 11 points for the Rhinos to book their place in the decider.

Victory for Brian McDermott's Rhinos marked the end of a six-match losing streak against Wigan, who under Shaun Wane have shown Championship form with one defeat in 15 games.

In fact Wane's side put 50 points on the Rhinos just a month and a half ago, although the influence of half-back Thomas Leuluai was a key absence as he recovers from a broken leg.

This battle of the two Challenge Cup heavyweights was steeped in history - as Wigan, with 18 final wins to Leeds' 11, enjoyed a period of dominance over the Yorkshire club during the 1990s.

However for Leeds it has not been getting to the final that has been the issue, it has been the outcome once they get there - with as many final defeats as wins in the competition.

The first half exploded into life early on as Rhinos upset the Warriors with a three-try salvo that stunned Wane's side.

There were only four minutes on the clock when Leeds pounced on an uncharacteristic error from Sam Tomkins, who fumbled a towering kick from Sinfield, and Ryan Hall was on hand to capitalise.

Carl Ablett and Hall poured forward onto Sinfield's skyscraping kick and when the Warriors full-back fumbled, Hall touched down in the corner.

Tomkins was again at fault when Sinfield's flat kick skimmed slowly into touch for a 40-20, and when the ball was swiftly worked right, Ben Jones-Bishop took Kallum Watkins's perfectly timed pass for a second score.

Warriors were shellshocked, and when Josh Charnley spilled 20 metres out, Leeds ripped through after Sinfield sent a forward pass to Jamie Peacock and Zak Hardaker took his offload beautifully to further extend the lead.

Just as Leeds looked to have established a commanding advantage, Wigan struck back with a quickfire brace of their own.

They got a foothold through Tomkins's thrilling break, and after Jones-Bishop knocked on to snuff out Gareth Hock's looping pass, Warriors reduced the arrears with George Carmont's try.

Second-row Hock got himself on the mark when took in a whipped pass from Brett Finch just inside his own half, and showed pace and power to take the Leeds defence on the outside before touching down.

There was no let-up in the intensity, or the try scoring and Leeds then added with another three scores, two of which owed much to the width of the Huddersfield pitch and the Rhinos knack of exploiting it.

Hall polished off Danny McGuire's break out wide, then moments later when he was stopped from touching down by interference, Ryan Bailey reached out a hand in the ruck to get the ball on the whitewash.

Sinfield's kicking was again at the heart of the Rhinos' sixth try as his curling chip to the corner was gathered beautifully by Jones-Bishop to take his side's score up to 30.

Wigan conjured up two final incidents of the half, firstly when Liam Farrell's sloppy pass fell to Ben Flower's feet, but the prop had the presence of mind to follow up his stub forward to score, and when Tomkins kicked for goal on the hooter.

After the free-scoring nature of the opening period, an eight-minute spell without a try was a relative drought but Leeds were the first off the mark in the second half.

Hardaker added his second try, picking up after Michael McIlorum's flick backward looked to have rebounded forward out of the hands of Rhinos scrum-half McGuire, but referee Ben Thaler gave the score without consulting the video referee.

Rhinos were keeping Wigan at bay but were unable to stop Cherry and Whites captain Sean O'Loughlin from scoring.

Sinfield then showed his big-game nous with a huge drop goal to leave Wigan with a three-try deficit.

They made the first inroads into that figure when Hock's run found Darrell Goulding, and his ball released the Super League's top-scorer Charnley for a fifth Wigan try.

However, Leeds survived and when Sinfield stepped up to land a late penalty, the chance to make it third-time lucky at the national stadium was finally sealed.

"It was the smart thing to do [Sinfield's drop goal] but I didn't breathe easily at any time throughout the game. Wigan were white hot the last time we played and I don't think they were far off today.

"They kept coming at us and, if our pack hadn't been as tough as they were, we wouldn't have got the job done.

"I also thought Danny McGuire was outstanding. They came at him but he was sensational defensively and kept probing away."

"The bad start didn't help but we made too many errors throughout the game. A few in the first half were uncharacteristic.

"I said before the game the team that completes best would win and that's what happened. It was our worst performance.

"We didn't turn up today. We've defended all year better than that. But take nothing way from Leeds. They wanted it more which to me is gutting. They've some real warriors in their team."