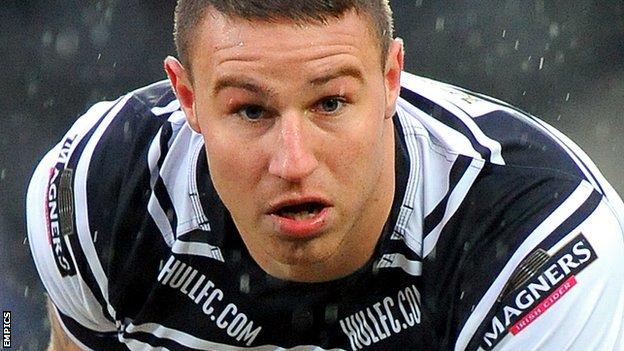 Castleford gave their performance of the season to extend Huddersfield's poor run of form to seven defeats in eight Super League games.

New Tigers half-back Jamie Ellis landed 10 goals from 11 kicks and grabbed a try on his debut for a 24-point haul.

James Clare's early try was cancelled out by Leroy Cudjoe but, from then on, it was all Tigers.

The fans are entitled to boo me and boo the players

The Tigers went ahead after four minutes when Clare recovered from a stumble to force his way over in the corner.

Nathan Brown's Giants replied seven minutes later when Danny Brough's high kick was plucked out of the air by Cudjoe to score.

Brough converted for a 6-4 lead but Castleford then dominated as forwards Craig Huby and Grant Millington cleverly sent centre Thompson over.

Cas survived the Giants' response, hitting back with two tries in five minutes as winger Youngquest went over before Owen regathered his own kick to score.

After the break Ellis made it 26-4 with two penalty goals in two minutes, and poor handling by the Giants was punished when Griffin intercepted Kevin Brown's pass and raced 95 yards to cross over.

Owen then grabbed his second try, Milner forcing his way over from acting half close in, while Ellis also crossed to cap a fine debut.

Coach Brown, aleady bound for St Helens next season, now has a week to lift his troops ahead of next Sunday's Challenge Cup semi-final against Warrington.

"What we've lacked in previous games is an inability to hold the ball but today we had a 90% completion rate in the first half and 90% in the second.

"Jamie Ellis, who had a very good debut, and Danny Orr were outstanding with their kicking games.

"We got what we deserved - a comprehensive win. We only conceded one try and that was from a kick. It was a pretty dominant performance.

"We had eight players out and a display like that takes a fair bit of guts and attitude."

"Today is the worst day since I've been at the club. We played a side who are struggling down at the bottom of the table with six or seven blokes out.

"We quit and it's sad to say that. We put 17 bodies out there and there was probably one or maybe two that had some soul - the rest were skeletons.

"We quit early in the game and as a coach obviously I take my share of the responsibility. It's my saddest coaching day since I've been at Huddersfield. We need to be much, much tougher as a group.