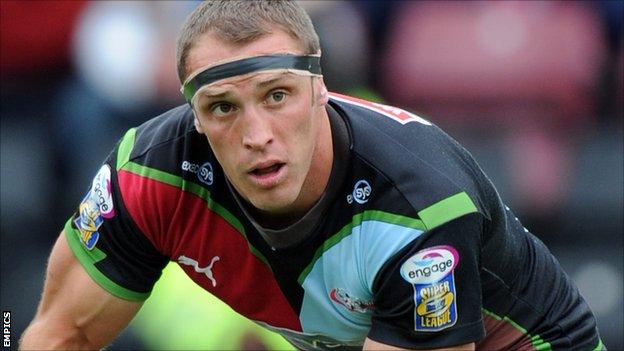 Workington Town were the last of the county's sides to play in the top flight in 1996, while Barrow saw their franchise application rejected in 2011.

"There's some outstanding talent up there, but it needs a Super League club," Purdham told BBC London 94.9.

"It's a shame, there's talent that never gets spotted."

Super League has seen its share of Cumbrian players progress through the ranks, with Purdham, Warrington's Ben Harrison and current Leeds hooker Shaun Lunt among those flying the county's flag in the top tier.

Clubs such as Barrow, Whitehaven and Workington do their best to provide opportunities for players, with moves for Lunt [ex-Town] and Kyle Amor [ex-Whitehaven] evidence of some progress.

However Purdham, who himself played the bulk of his career in Super League with London-based franchises the Broncos and Harlequins, would like to see a top-level pathway for players in their own region.

"Players get to a certain standard and they have to choose between work and rugby, and most of the time it's work because rugby [outside of Super League] doesn't pay that good a wage," Purdham added.

"Whereas if there was a full-time professional club they would have something to aim for, and a solid wage each month for them to earn a living."