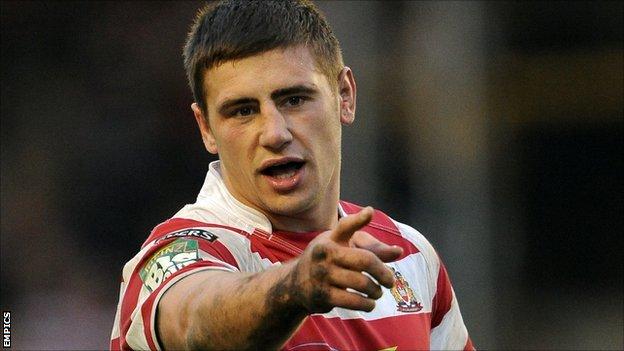 Wigan Warriors hooker Michael McIlorum is free to face Wakefield on Sunday after pleading guilty to his charge for a Grade A punching offence.

The 24-year-old was sent off by referee Tim Roby after striking Olivier Elima in Friday's 30-22 defeat by Bradford.

Had he chosen to contest the charge and been found guilty, McIlorum would have faced a one-match suspension.

However, his early guilty plea means he can play for the Super League leaders against the Wildcats on Sunday.

But McIlorum will be unable to offer another early guilty plea if he is charged again by the RFL within the next 12 months.

Meanwhile, coach Shaun Wane has called on his younger players to cope with the pressure of tight matches.

The Warriors were without several first-team players because of injury and rested full-back Sam Tomkins.

"It's a lot of pressure on young shoulders," Wane told BBC Radio Manchester. "We fell down a little bit and that's something we need to fix.

"We need to make sure that, in pressure situations like that, our juniors need to be more switched on."

Despite the defeat, Wigan remain three points clear at the top of Super League because Warrington were unable to take advantage of their slip-up, losing heavily at Salford.

"At the end of the day, we're still top of the competition and we're a good team," added Wane. "The loss doesn't change my mind. We'll be a different team going to Wakefield (on Sunday)."