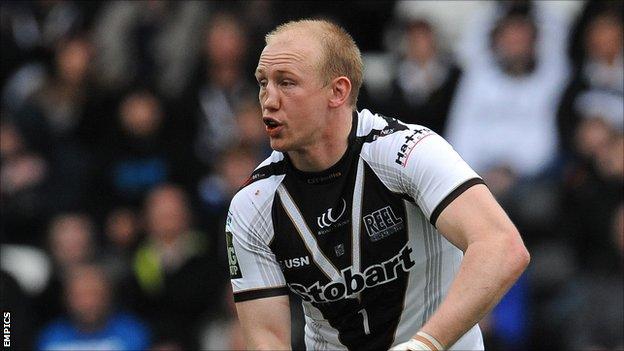 Widnes full-back Shaun Briscoe is set for another spell on the sidelines after suffering a torn pectoral muscle in the 54-12 defeat at Wigan on Monday.

The former Hull KR man had just returned from three months out of action with a groin problem.

Coach Denis Betts is hopeful, however, that captain Jon Clarke and prop Sione Kite will return for the home fixture against Castleford Tigers on 2 July.

Briscoe was forced to play on with the injury and it contributed to the try that saw Wigan winger Josh Charnley complete his hat-trick at the DW Stadium.

"It was a brave effort from Shaun," Betts told BBC Radio Merseyside. "He shouldn't have been on the field for the two sets that he was when Wigan had the ball.

"He stayed there because we had no ability to change him, which is a very strange rule.

"He stuck it out, stayed strong and unfortunately got caught out right at the end when (Josh) Charnley scored his hat-trick."

Super League's bottom club were behind from the very early stages, conceding three tries in the opening 13 minutes.

"In the first half, a lot of their field position and tries came from penalties, dropped ball and from us sacrificing field position," added former Wigan player Betts.

"A side with the quality of Wigan, they scored those points on offer.

"We spoke earlier in the week that if we did that, that was what was going to happen to us. After the first 15 minutes, we knew we would be under a lot of pressure."